This teach­ing guide is part of a series designed to make our trans­la­tions acces­si­ble for use by edu­ca­tors in a vari­ety of set­tings. This guide accom­pa­nies ​“Gob­lin Nogood has Run Out of Clout” by Jacob Glat­stein, trans­lat­ed by Jef­frey Shandler.

We’d like your feed­back to make these guides as use­ful as pos­si­ble. Please write to [email protected]​ingeveb.​org to tell us what you found help­ful, what need­ed clar­i­fi­ca­tion, what you would like to see more or less of, and what texts you would like us to pro­duce guides for next. If you are inter­est­ed in cre­at­ing a guide for a text on our site, or if you are already teach­ing with a text on our site and have ideas to share, please also write to [email protected]​ingeveb.​org.

Jacob Glatstein’s “Goblin Nogood Has Run Out of Clout” first appeared in the June/July 1943 issue of Kinder-zhurnal, a Yiddish children’s magazine based in New York City. Goblin Nogood, the central figure in the poem, is a stand-in for Hitler, and the poem anticipates Hitler’s demise and the ultimate collapse of Nazi Germany. Written in response to a particular moment in history with a juvenile audience in mind, the poem disappeared into obscurity during the postwar years. Jeffrey Shandler rescued the poem from complete oblivion when he published an English translation of it in In geveb: A Journal of Yiddish Studies on November 9, 2017. Shandler’s translation of this poem brings into the light an intriguing example of Yiddish children’s literature from the early 1940s, but it also lends itself to a discussion of how to communicate the horrors of Nazism and the Holocaust to a child audience.

Jacob Glatstein (1896-1971) was born in Lublin, Poland, but he immigrated to the United States in 1914 and settled in New York City, where he had an uncle who helped him when he first arrived. Before he immigrated, he spelled his name Yankev Glatshteyn, and he occasionally used this spelling of his name even after he called New York City his home. In 1918, he entered New York University with the intention of studying to be a lawyer, but he lost interest in the law and instead pursued a career as a writer. He immersed himself in the community of Jewish intellectuals and writers that was thriving in New York City at the time. In 1919, he became involved with an avant-garde group of Yiddish writers sometimes known as the In zikh poets, who promoted modernist Yiddish poetry. Beginning in the early 1920s and continuing throughout the rest of his life, he wrote and published Yiddish poems for adults. He ended up publishing thirteen collections of poetry. He also published essays, two novels for adults, and many newspaper columns. Almost all of his publications originally appeared in Yiddish. 1 1 Chana Bloch, “Jacob Glatstein: The Literary Uses of Jewishness,” Judaism XIV (Fall 1965): 414-31.

Glatstein is not generally classified as a children’s author, but he wrote a handful of works intended for young readers. He knew the editor of Kinder-zhurnal, a Yiddish-language children’s magazine that came into existence in 1920 and lasted until 1981. Beginning in the mid-1920s, Glatstein occasionally contributed pieces to this magazine. In addition to “Goblin Nogood Has Run Out of Clout,” Glatstein’s contributions to this magazine include “Moldo,” an anti-war fable that came out in 1927, and “Yidl with His Fiddle,” a story about the Warsaw ghetto uprising that came out in 1944. He also wrote a children’s novel titled Emil and Karl, which first appeared in 1940. Set in Vienna in 1938, this novel deals with the friendship of two boys, one Jewish and the other Christian, who are caught up in the aftermath of Kristallnacht. This novel has been translated from Yiddish into English by Jeffrey Shandler, the same person who translated “Goblin Nogood Has Run Out of Clout.” 2 2 Jeffrey Shandler, “The Holocaust for Beginners: Yankev Glatshteyn’s Emil un Karl and Other Wartime Works for Young American Yiddish Readers,” MELUS: Multi-Ethnic Literature of the U.S. 37, no. 2 (2012): 109-130.

In creating the character Goblin Nogood, Glatstein used humor in an effort to deflate a Hitleresque despot while at the same time appeal to the sensibilities and sensitivities of child readers. In this regard, Glatstein anticipated by fifteen years Dr. Seuss’s Yertle the Turtle, a picture book that came out in 1958. Dr. Seuss, the pen name of Theodor Seuss Geisel, and Glatstein were contemporaries of one another, and both of them became involved in the fight against fascism and Hitler. Initially, Seuss skewered Hitler directly in a series of political cartoons that appeared in the leftist newspaper PM, but he went on to create Yertle the Turtle and other children’s books in which he addressed Nazism in a more oblique way. In both “Goblin Nogood Has Run Out of Clout” and Yertle the Turtle, a despot’s dreams of global domination are dashed, and the despot’s rule comes to an end. In the conclusion of Gladstein’s poem, “Everywhere armies are on the way,” and these armies unite to defeat Goblin Nogood. The poem ends with the line “Goblin Nogood is kaput.” Seuss’s book concludes with Yertle being reduced to being “King of the Mud” after a turtle named Mack finally decides he has “taken enough” and stands up to Yertle.

Goblin Nogood and Yertle are both based on Hitler, but the description of Goblin Nogood makes specific references to Hitler, such as Hitler’s early work as a housepainter, while Yertle is portrayed in a more general way. Similarly, “Goblin Nogood Has Run Out of Clout” makes specific references to a long list of Hitler’s victims that includes not only Jews but many other groups, such as “The French, the Greeks, Honghuzis and Russkies,” while the victims in Yertle the Turtle are a bunch of turtles who live in a pond. For these reasons, “Goblin Nogood Has Run Out of Clout” functions as a work of historical allegory in which a character operates as a symbol for a figure from history. Yertle the Turtle, on the other hand, is more of a political parable stressing the importance of standing up to despots. 3 3 Mark I. West, “Dr. Seuss’s Responses to Nazism: Historical Allegories or Political Parables?”, The Looking Glass : New Perspectives on Children’s Literature 19.1 (2016), https://www.lib.latrobe.edu.au/ojs/index.php/tlg/a...

Although “Goblin Nogood Has Run Out of Clout” does not have the same kind of universal appeal that has helped to make Yertle the Turtle a classic children’s book, Glatstein’s poem does give contemporary readers a sense what it was like to live during World War Two. As Glatstein’s poem shows, even in a time of dread and darkness, Jews and many of Hitler’s other victims held out hope that Hitler’s genocidal agenda would eventually run “out of clout.”

1. Comparing Glatsein’s Poem to Yertle the Turtle: Ask students to read both works and then compare and contrast them. Ask the students to address, either in writing or during a class discussion, the following questions: In what ways are Goblin Nogood and Yertle alike? How are they different? How do these two works differ in terms of the authors’ underlying goals or purposes? In what ways do these authors attempt to address the concerns and experiences of child readers? How do these works relate to actual historical events?

2.Exploring the Role of Goblins and Demons in Jewish Children’s Literature: By using the word “goblin” in his poem, Glatstein taps into a long tradition of Jewish folktales and stories about goblins and demons. Ask the students to discuss how this aspect of Glatstein’s poem helps shape the readers’ response to Goblin Nogood. Have the students read Eric A. Kimmel’s Hershel and the Hanukkah Goblins. Ask the students to discuss the connections between Glatstein’s poem and Kimmel’s story.

4.Contrasting “Goblin Nogood Has Run Out of Clout” to Glatstein’s Holocaust poems for adults: Glatstein wrote many poems for adult readers in which he responded to the horrors of the Holocaust. The poems have been collected in a volume titled I Keep Recalling: The Holocaust Poems of Jacob Glatstein. Have the students read some examples of the poems in this collection, such as “Millions of Dead.” Ask the students to contrast “Goblin Nogood Has Run Out of Clout” to his adult poems about the Holocaust. Have them address the following questions: How does the age of the intended audience affect Glatstein’s approach in these poems? To what extent does the concept of hope figure in these poems?

Eichler-Levine discusses the role that goblins and other monsters play in Jewish children’s literature and suggests that such monsters relate to the fears associated with Jewish life.

Kadar devotes chapter four of this scholarly book to covering this history of Kinder-zhurnal, the children’s magazine that first published Glatstein’s “Goblin Nogood Has Run Out of Clout.”

This article provides a detailed and thoughtful analysis of Glatstein’s Emil and Karl and relates it to more contemporary works for children that also deal with the Holocaust, such as Markus Zusak’s The Book Thief.

This article provides background information about Dr. Seuss’s Yertle the Turtle and relates this book to Seuss’s anti-Nazism work. 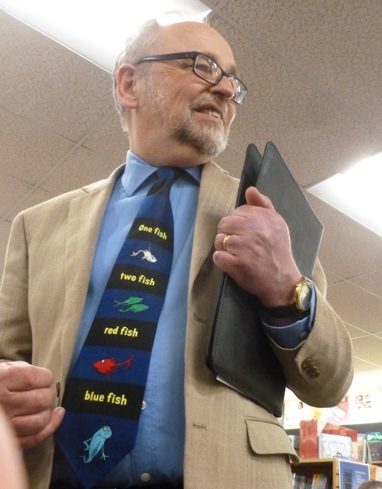 Mark I. West is a Professor of English and Chair of the Department of English at the University of North Carolina at Charlotte, where he has taught since 1984.

Goblin Nogood Has Run Out of Clout 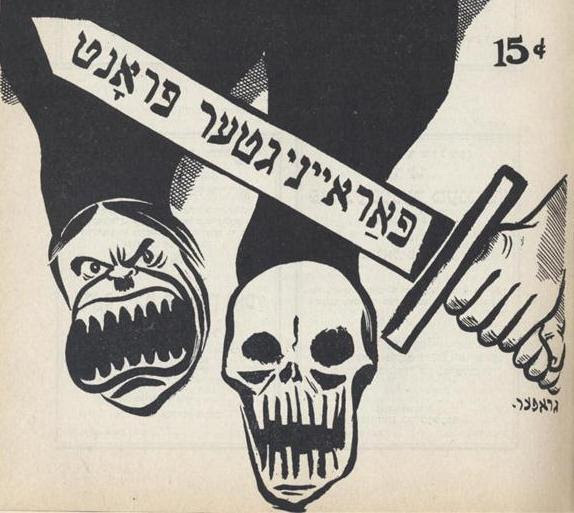 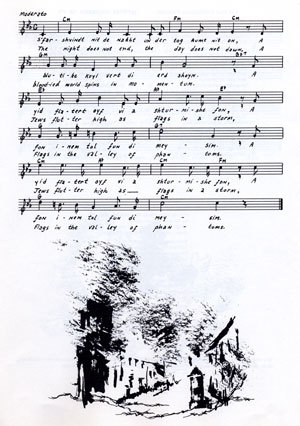 Instructors share their thoughts on teaching with Yiddish in Holocaust Studies contexts.