The fol­low­ing is a sum­ma­ry of the first pirem-shpil or ​“Purim play” writ­ten, pro­duced and per­formed by Bobover Hasidim in the Unit­ed States after the Sec­ond World War. The Bobover Hasidim, orig­i­nal­ly from Bobowa, Poland, are a com­mu­ni­ty of Holo­caust sur­vivors, their chil­dren, grand­chil­dren, and great-grand­chil­dren. The play was per­formed in the old Bobover besme­dresh on the Upper West Side of New York City dur­ing Purim 5708 (1948).

The sum­ma­ry was writ­ten from mem­o­ry in 1978 by Moyshe Aftergut, a retired dia­mond deal­er, who wrote, direct­ed and played the main role in the pirem-shpil. Aftergut direct­ed the annu­al Bobover pirem-shpiln for six­ty-five years, up until Purim 2014. 1 1 I would like to thank Dr. Cha­va Lapin, a board mem­ber of the YIVO Insti­tute for Jew­ish Research, for her valu­able assis­tance in the translation.

The idea to revive the tra­di­tion of the pirem-shpil in the Unit­ed States was that of R. Shloyme Hal­ber­stam (1906−2000), who was the Third Bobover Rebbe, the first in Amer­i­ca; and a Holo­caust sur­vivor who lost his wife and two of his chil­dren dur­ing the war. R. Hal­ber­stam had met Aftergut after the war in the Dis­placed Per­sons Camp in Bary, Italy, where he noticed his musi­cal tal­ents. R. Hal­ber­stam arranged a visa to the USA for Aftergut, where he became one of the first mem­bers of the Bobover com­mu­ni­ty there. Before Purim 1948, the Rebbe asked Moyshe Aftergut, then a stu­dent at the Bobover yeshi­va, to write and per­form a pirem-shpil so that the tra­di­tion­al Bobover pirem-shpil would not be forgotten.

The result was In tsayt fun far­numen­em poyln, 2 2 For more on the Bobover Hasidim pirem-shpiln, see Shifra Epstein, ​“The Bobover Hasidim Piremsh­piyl: From Folk Dra­ma for Purim to a Rit­u­al of Tran­scend­ing the Holo­caust,” in Janet S. Belkow-Shalin, ed., New World Hasidim: Ethno­graph­ic Stud­ies of Hasidic Jews in Amer­i­ca (New York: SUNY Press, 1994) 237 – 255. which was per­formed just three years after the atroc­i­ties of the war and before an audi­ence com­posed of survivors.

The first two scenes are set in a Ger­man occu­pied ghet­to, while the final scene takes place after the Amer­i­can sol­diers had lib­er­at­ed the camps. Actors even wore the striped uni­forms which they brought with them to the USA after the war.

As in the pirem-shpiln per­formed by the Bobover pre-World War II, in In tsayt fun far­numen­em poyln all the play­ers were ama­teurs and male. Moyshe Aftergut played the only woman in the play, Beyle Yakobow­itch, whose son is tak­en away.

Music, which was cen­tral to the per­for­mance of the pirem-shpiln in East­ern Europe, was also cen­tral to In Tsayt fun far­numen­em poyln. The roles were most­ly sung with musi­cal accom­pa­ni­ment, and the music was most­ly bor­rowed from old­er pirem-shpiln as well as from pop­u­lar Yid­dish songs and can­to­r­i­al music, cre­at­ing the appro­pri­ate ambiance.

The music of one song, ​“Mame, gib dayn brukhe tsu dayn kind (“Moth­er, Give a Bless­ing to Your Child”), best illus­trates the role of music in cre­at­ing the set­ting for the play. The song was writ­ten by an unknown com­pos­er and was sung by moth­ers in the ghet­tos dur­ing World War II as farewell songs to their chil­dren before they were tak­en away. 3 3 The song was pub­lished in Eleonor Melotek and Malke Got­tlieb, We are here: Songs of the Holo­caust (New York, 1983) 18 – 19.

The fol­low­ing year, aware that the play had such a strong emo­tion­al impact on the com­mu­ni­ty, the Bobover Rebbe pro­hib­it­ed its per­for­mance and rec­om­mend­ed a return to themes from the tra­di­tion­al pirem-shpiln that the Bobover per­formed before the war. In the years since then, the Bobover have per­formed more than thir­ty pirem-shpiln in Bobover Yid­dish, both on bib­li­cal and non-bib­li­cal themes. The major­i­ty of them are new, writ­ten in the Unit­ed States.

Click here to down­load a PDF of this text and its translation.

BS”D (Besiyata Dishmaya) “With the Help of Heaven”

Written and directed by Moyshe Aftergut (“May his Light Shine”)

A mother whose husband has already been taken away from her clings to her fifteen- or sixteen-year-old child, Yankele, caressing him, as if he were a small child who could not even walk yet. She tries to reassure him and herself that the monsters, the Nazi officers, will not carry him off to “work.”

Muttering to herself, she remembers her home, her parents, her brothers and sisters, relatives, friends, and acquaintances. From time to time the mother gives a deep but soft sigh in order not, God forbid, to awaken the child.

Recounting to herself names and episodes, she groans to herself, “And now? Gone, empty, wasted . . . Someone’s coming!”

Hearing the words “Someone’s coming,” Yankele wakes up and asks her fearfully: “Who is coming, mother?” To which the mother Beyle replies, “Sleep, my child, no one is coming.”

However, the sad truth is that they hear the steps of the beasts’ boots. The beasts break into Yakobowitch’s home, forcefully seize the mother, and ask: “Are you Beyle Yakobowitch? And this is your son? Your sentence is set.” The soldiers throw her to the ground and try to take Yankele with them. A fight begins between the mother and the murderers, but to no avail. Yankele is gone. The mother, Beyle, is left alone, lying on the floor.

As if she had fallen into a trance, her thoughts half clouded over, she talks to herself. Only shuddering can be heard. Speaking so, with sighs and despair, unable to make peace with the sad truth, she begins to fantasize. In her thoughts, she casts total darkness over everything around her.

Several days later, a messenger from the devils appears, an SS officer with a sack in his hand. He asks her, “Is your name Beyle Yakobowitch?”

When she answers “Yes” he gives her the sack and says:
“Here is your child . . .”
Delighted to see her little child, she seizes the sack and presses it firmly to her heart, smiling and not able to take her eyes off her handsome radiant child who does not react to her tenderness and affection. She looks around; there is something wrong with her beautiful child . . .

Then she sees the writing on the sack: “ashes.” She opens her eyes wide and her body begins to tremble. She presses the sack once more to her heart, then throws herself on the ground, still holding it. She opens it, puts her hand inside, and slowly takes it out . . . ash!

Her cry of “These are the ashes of my Yankele, my father, my mother, my brothers, my sisters,” causes the world to tremble and the skies to tear apart. Beyle raises herself up, hitting and smashing everything that happens to pass before her eyes. She strikes a match, runs outside, and races from house to house, setting houses and trees on fire and screaming at the bandits:

“If you can turn my Yankele into ash, then I can set fire to everything that can be burned, and let it burn!—I have only one request: transport me with my child in the same small sack of ashes . . . ”

We hear the American national anthem. The American liberation has begun. The city is full of American soldiers; some of them are giving Beyle first aid.

A knock is heard at the door, and Yankele, her son, rushes in. Beyle, emaciated and broken in spirit, is dumbstruck. “Is this a vision from the Valley of Death?” she asks herself. It takes some minutes before her failing eyes start to shine with motherly love.

It turns out that Yankele had managed to escape from the transport to the forest, where some partisans found him and brought him to their camp.

Yankele embraces his mother and kisses her. They cry together about the miracle that took place. Coming to himself, Yankele says:
“Mother! Just as strong currents throw themselves at little islands but cannot dislodge them, so Yankele will never be forced apart from his mother.” 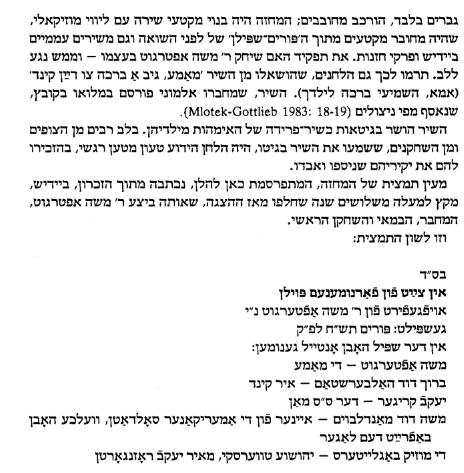 Ḥananiah, Mishael and Azariah in the Fiery Furnace (The Daniel-Shpil) 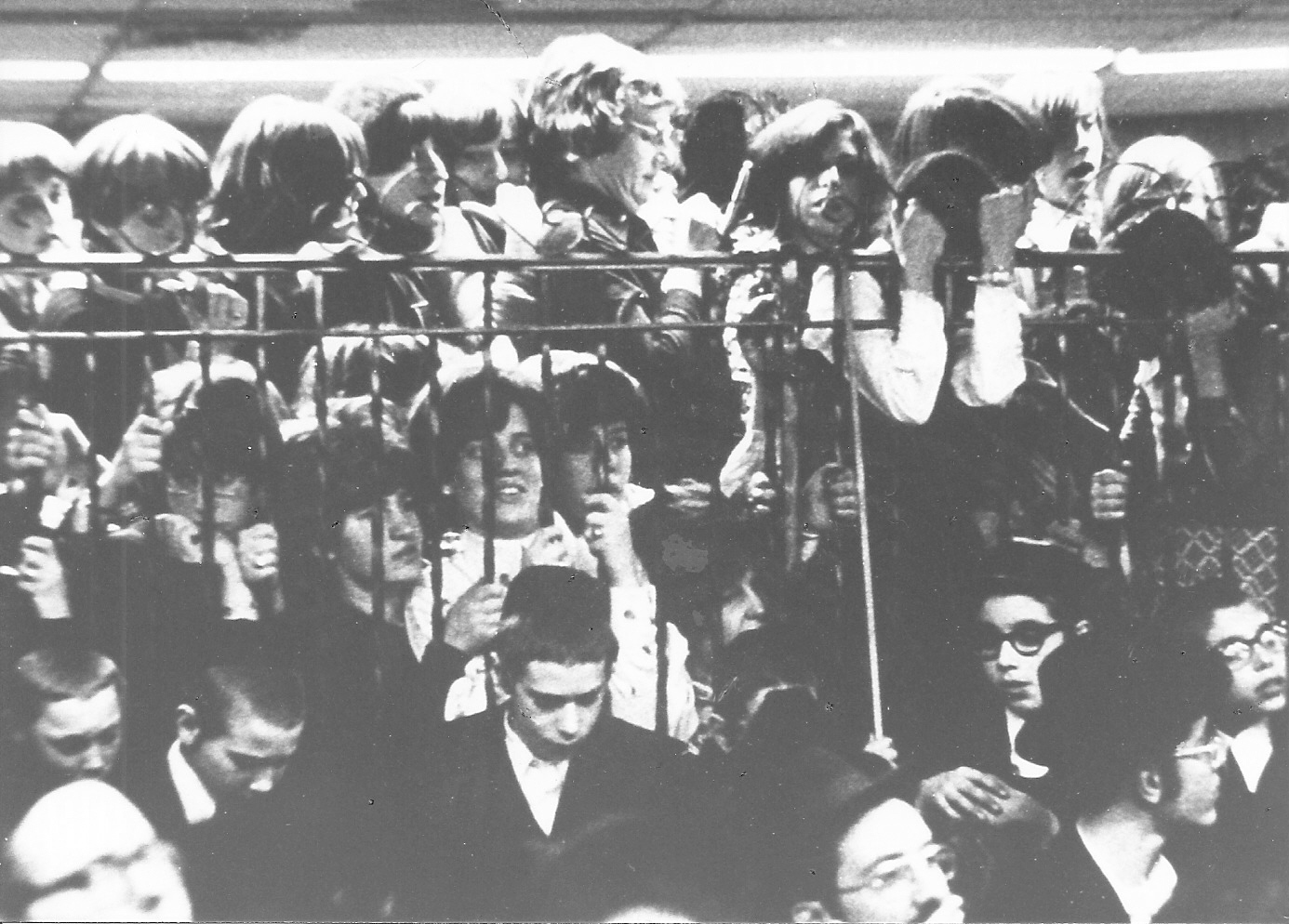 A new translation of a purim-shpil performed by the Bobover Hasidim in New York in 1987 with audio and photographs of the performance offers a unique glimpse into contemporary hasidic culture.

The first in a series of posts about an autobiography found in the YIVO archives from 1930s Poland.