Speaking of Sutzkever: On Yiddish in Scandinavia

Speaking of Sutzkever: On Yiddish in Scandinavia

Copen­hagen, Novem­ber 15, 2017: In the after­noon, a group of schol­ars, Yid­dishists, and social activists gath­er togeth­er from Northamp­ton, Mass­a­chu­setts; New York; Tel Aviv; Cham­paign-Urbana, Illi­nois; Sejny, Poland; Vil­nius; Dublin; Stock­holm; Lund; and Copen­hagen. They meet at the Dunkin’ Donuts in Copen­hagen’s cen­tral train sta­tion and go from there by bus to the old Jew­ish ceme­tery in the heart of Nør­re­bro, an increas­ing­ly mul­ti­cul­tur­al sec­tion of town. The ceme­tery is a prime Jew­ish mem­o­ry site; a vari­ety of beau­ti­ful old mat­seyves (grave­stones) doc­u­ment 350 years of Jew­ish life in Copen­hagen. The group’s final stop, locat­ed across from Copenhagen’s Jew­ish ceme­tery, is the Lit­er­aturhaus. More than six­ty years after the poet last set foot in Den­mark’s cap­i­tal city, Avrom Sutzkev­er’s poems are being read aloud in the heart of town. Here, Jan Schwarz reflects on present-day Yid­dish in Scan­di­navia, and Sutzkev­er’s influ­ence there.

In the early 1950s, Yiddish poet Avrom Sutzkever visited Copenhagen and inscribed one of his books for a local Yiddishist: “May your children read the poetry in this book. Amen!” Though characteristically fervent, Sutzkever’s wish was not fulfilled.

The Yiddishist’s son kept the book but he never learned to read it, as is typical among Danish Jews. Only a handful of Jewish survivors were allowed to settle in Denmark after the war, and although a few farbrente Yidishistn taught Yiddish language classes in postwar Copenhagen, the language was not passed on to the next generation of Jews. Two decades later, in 1968-1969, there were only a few Yiddish speakers among the three thousand Jewish refugees who came to Denmark after being forced to leave Poland.

In Sweden, by contrast, Yiddish flourished among the sheyres-hapleyte (Jewish survivors) rescued by the Red Cross from concentration camps in the last months of the war. Thousands of them were transported from Nazi Germany via Denmark to Sweden, riding white buses marked with a red cross. The majority of survivors came from the Łódź ghetto and from Auschwitz, and they succeeded in passing on their Lodzher Yiddish to their children, and created Yiddish speaking communities in cities such as Borås and Malmö. Today, the Yiddish-speaking children of those survivors are deeply committed to Yiddish culture and language, and they have become the driving force behind the current Yiddish revival in Sweden.

Thanks to the decision in 2000 by the Swedish government to make Yiddish the country’s fifth official minority language along with Sami, Romani Chip, Finnish, and Meänkieli (a dialect of Finnish), Yiddish courses have been offered at Lund University since 2008. Currently, twenty to thirty students take courses in Yiddish film, literature, and language each semester, and Yiddish cultural activities, festivals, and workshops are regularly organized in Stockholm, Göteborg, Malmö, and Lund. Recently, there has been a small surge in the publication of new Yiddish children books. It is even possible for parents to request Yiddish classes for their children in the Swedish public schools as long as the language is considered their ‘arvspråk’ (heritage language). These cultural activities and book publications are subsidized by the Swedish government.

In Denmark, Yiddish is almost invisible due to a very different policy regarding minority populations than in Sweden. Danish minorities such as the Inuit people (Greenlanders), the Roma, and the Jews have no particular minority rights, and the Danish government does not subsidize their cultural and linguistic heritage. The Sutzkever reading in Copenhagen and conference in Lund this past fall comprise a first important attempt to initiate collaboration between Yiddishists, academics, and poetry enthusiasts in the two neighboring countries and beyond.

At Literaturhaus, a popular poetry venue in the city, fifty people came to hear Sutzkever’s poetry read by his translators in Lithuanian, English, Swedish, and Danish, as well as in the beautiful original Yiddish, read by Paul Weichsel, a veteran Yiddishist who traveled all the way from Champaign-Urbana, Illinois. The audience was a mix of Polish Jews from the most recent immigration to Denmark in 1969, descendants of Ostjuden who came to Copenhagen prior to World War I, some Viking Jews with ancestry going back to the first Sephardic immigration to Denmark in the seventeenth century, and poetry lovers of all stripes. The delicious catered Lebanese food provided a heymish atmosphere. Two new books were being celebrated: Heather Valencia’s translations of Sutzkever’s poems, Still My Word Sings, published recently in a bilingual edition by University of Dusseldorf Press, and Jan Schwarz’s Danish translation of Green Aquarium: Stories from the Jerusalem of Lithuania, a selection of Sutzkever’s fiction and memoirs published in 2017 by Multivers in Copenhagen. One high point of the evening was a moving rendition of Sutzkever and Katcherginsky’s songs from the Vilna ghetto by the English singer Stephanie Brickman, accompanied by Jan Schwarz at the piano: “Unter dayne vayse shtern,” “Friling,” and “Vilne, shtot fun gayst un tmimes.”

After the performance and poetry reading, the international group returned to the Copenhagen Central Station and crossed the bridge to Skåne in Southern Sweden, passing through Malmö and arriving an hour later in Lund.

The following day featured a full program with lectures about Sutzkever and Vilnius at the Pufendorf Institute, an old lecture hall in the heart of the Lund University campus. Attending the conference were many students from the Yiddish program at Lund University, the only such program at a Scandinavian university, as well as faculty and students in a variety of fields including the university’s newly established Network for Jewish Studies.

The conference was divided into three panels: “Minorities and Nationalities: The Case of Vilna,” “Poetic Responses to the Holocaust: Miłosz and Sutzkever,” and “Sutzkever in the USSR and Israel.” The lecturers, historians, and literary scholars with expertise in the field of Yiddish, engaged in lively debate facilitated by respondents from the University of Copenhagen and Lund University.

A lec­ture from the Con­fer­ence ​“Vil­na – Jerusalem of Lithua­nia — and The Poet­ry of Avrom Sutzkev­er” that took place at the Pufendorf Insti­tute at Lund Uni­ver­si­ty in Swe­den, Novem­ber 16th 2017. By Krzysztof Czyzews­ki, The Bor­der­land Foun­da­tion, Poland.

One highlight of the conference was a presentation by Dr. Mindaugas Kvietkauskas of Vilnius University, about the reception of Sutzkever’s work in Lithuania, where it has become available in Lithuanian translation just a few years ago. His recent Lithuanian translation of Sutzkever’s Griner akvarium has become a best-seller. Krzysztof Czyżewski gave a fascinating lecture about the Borderland foundation, established almost two decades ago in the town of Sejny in Eastern Poland near the border with Belarus, emphasizing the need for multiculturalism amidst rising ethnonationalism in contemporary Poland.

The day closed with a humorous account by local Yiddishist Salomon Schulman, about an encounter with Sutzkever in Paris some years before: When Sutzkever learned that Schulman was a physician, the partisan hero started to complain about his various health problems. Sutzkever asked Schulman for professional advice, but to no avail. Between Schulman’s Lodzher Yiddish and Sutzkever’s Litvak accent, the two could hardly understand each other, and were loath even to try.

Schwarz, Jan. “Speaking of Sutzkever: On Yiddish in Scandinavia.” In geveb, June 2018: https://ingeveb.org/blog/sutzkever-in-scandinavia. 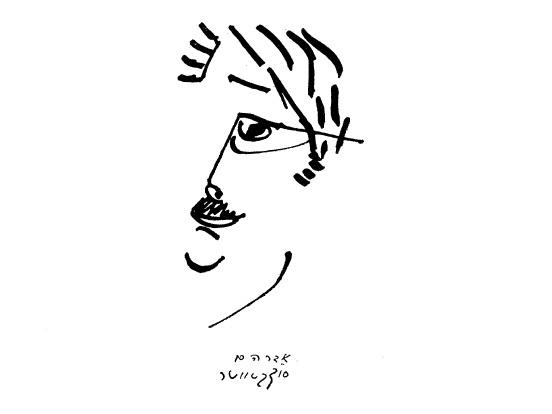 Three poems from Abraham Sutzkever’s collection Poems from My Diary.