As 2016 draws to a close, In geveb has come a long way from the fledgling web publication it was just one year ago. In that time we have published dozens of contributions from translations of poetry to pedagogical guides for the modern Yiddish instructor to book reviews, articles and blog posts that tie Yiddish language and culture to the present and future.

To help us reflect on what we’ve accomplished and how we can continue to grow, we recently presented to willing readers the opportunity to tell us a little about themselves, their interests, and how they feel about us. We learned a great deal from the more than sixty readers who responded, and we thought the rest of our readers might be equally interested to learn about who else is reading In geveb and what feedback they gave us. To our great relief, most respondents seemed pretty happy with us, calling us “Original, Critical, Fun!” “The real deal,” and “On point.”

So, how did readers find us, a web-based Yiddish publication? They way we find anything online, it turns out: mostly through Facebook and Google. In geveb now has nearly 2000 likes on our Facebook page, where we post new content from our site and across the Yiddish internet daily. Readers stumbled onto our page on their own or found it after a Facebook friend shared an article. Others found themselves searching online for a Yiddish magazine and discovering us. Word of mouth also worked to our advantage. Yiddishists talk to other Yiddishists, whether as friends or colleagues; Yiddish instructors mention the site to their classes, and one reader even ended up at our launch party and became enamored of us there.

As an English-language publication, we wanted to know what relationships our readers have to the language the site is about. We asked, how well do you speak Yiddish? Many readers, almost half, considered themselves to be “Intermediate,” a nebulous term that indicates some competency but also room to learn. A remaining third considered themselves fluent, while about a fifth regard themselves as “Beginners.” A few others note that their speaking ability outshines their reading ability.

As to how our readers came to be Yiddish speakers, no answer was simple. Many of our sample originally learned Yiddish either at home—from parents, grandparents, or other family members—in university or graduate school, or in courses outside of university sponsored by organizations like YIVO. However, most went on to study Yiddish in a variety of environments, regardless of how they started. While someone might have learned Yiddish from their grandmother or in a Yiddish “shule” as a child, they may have continued to study in university, teach themselves from a textbook, or take classes or summer programs as adults. One reader enigmatically told us that they picked some Yiddish up “on the road.” Only one reader admitted that they do not speak Yiddish at all, which is amazing considering that it suggests all of the other sample participants consider themselves to be “at least beginners/trying to learn.” This also means that many of our readers made a repeated effort as adults to hone their Yiddish ability. Postvernacularity shmostvernacularity; In geveb readers are dedicated learners of the language.

Perhaps unsurprising for readers of a journal that emphasizes translation and language pedagogy, a great deal of our readership is polyglot. When given the opportunity to list languages that they speak besides English and Yiddish, the second most popular languages—logically, given their linguistic ties to Yiddish—were German and Hebrew, followed by Spanish and French. A handful of readers also speak Romanian, Italian, Dutch, Arabic, Russian, Ukrainian, Swedish, Portuguese, Esperanto, Lithuanian, Polish, Ancient Greek, Japanese, Latin, Amharic, Hungarian, Ladino, and Serbo-Croatian. Two readers tied for the prize of most polyglot, speaking six other languages in addition to Yiddish and English (though we wouldn’t be surprised if some of you out there can challenge their title!).

Moreover, though a curious and intellectual bunch, almost half of surveyed readers said they were not affiliated at the moment with an academic institution. The remaining half was split between students and faculty. 1 1 And our two librarians and one administrator, we see you!

However, over half of those surveyed said they regularly use Yiddish for school or work, whether as Yiddish instructors, translators, rabbis, actors, historians, or novelists, with a huge number of people specifically mentioning “research.” Our readers are delving into research topics that require knowledge of Yiddish history, texts, and culture. Interestingly, very few readers said they currently used Yiddish in school.

When asked more directly if they considered themselves to be “scholars of Yiddish,” no answer was straightforward. Some readers were squeamish about declaring themselves to be Yiddish scholars, especially those with university credentials in history or Judaic studies whose research happens to involve Yiddish. Some with no credentials proudly declared themselves to be scholars of Yiddish. To be a Yiddish scholar is all about the attitude. A certain number of people gave a firm no to the question: “Scholar? No! I try to educate myself further,” but a number of answers were hopeful or ambiguous and indicated a readership that values extra-institutional scholarship. “An aspiring one!” said one reader.

We then asked our readers to tell us how they feel about us. Perhaps not surprisingly for a group with so many “intermediate” speakers of Yiddish, besides the many readers who say they love the site in its entirety and read every section, most pointed to the bilingual translations as their favorite component of In geveb. Several readers pointed to the choices of topic as something they valued about us. “I like how IG seems very progressive; articles on queerness, race, etc. are pretty common, which does you guys credit. You’re presenting Yiddish as something connected to life rather than closed off from it, and I really appreciate that.”

Jennifer Young’s article about the relationship of Jews to American whiteness ranked highly as a favorite piece published in the past year, as did In geveb editor Jessica Kirzane’s translation of Joseph Opatoshu’s story “A Lynching.” In geveb’s readership knows their history and wants to know about the role of Yiddish and Yiddish speakers within that framework—even the difficult aspects of that history. Other pieces repeatedly name-checked as favorites were Vardit Lightstone’s pedagogy article about LGBTQ vocabulary in Yiddish, as well as Emil Kerenji’s translation of Joseph Cohen’s article about the history of Jewish Anarchism in the United States.

Some readers were not shy about pointing out elements of In geveb that could be improved upon. One said they’d like to see more academic essays, and series of essays on specific topics. We agree—which is why we are currently circulating a call for guest editors and special issues as one way to attract more academic articles grouped around topics and themes. We will always be looking for a broader range of writers willing to help us expand. Still on the topic of our academic articles, another reader asked, “How do you decide which Yiddish Studies conferences get write-ups, do you try to stay abreast of what’s going on and find bloggers, do you develop relationships with the conferences, or is it on a more ad-hoc basis?” We do our best to stay informed about conferences related to Yiddish, mostly through the network of our editorial board. That said, we urge all of our readers to contact us about things in the Yiddish world we should be covering. It’s been exciting over the course of the last year and a half to see that we’ve gotten on the radar of more conference organizers who reach out to us, as do many academic publishers now about their publications related to Yiddish.

Several readers expressed that they wished there was more Yiddish content on the site, other than the bilingual translations. In fact, In geveb has begun to experiment with publishing dual language pieces in Yiddish and English, such as Zackary Sholem Berger’s review of Yisroel Nekrasov’s new book of poems and Isaac Bleaman’s translation of a talk by the editors of the new comprehensive dictionary, and we’re likely to do more pieces like this across our sections. For reasons of accessibility and reach, In geveb is an English-language publication, so for the time being we will always publish material with an English translation. Two respondents described us as “too PC” (meaning “politically correct,” which we might prefer to describe as attempting to use inclusive language), “too polemical, and agenda-driven.” In geveb is committed to a vision of Yiddish Studies that has contemporary and political relevance, that studies a language belonging both to Hasids and radical queer performers, and we’re committed to providing a scholarly and journalistic platform for the broadest range of engagement with Yiddish.

As for the nature and background of the readers themselves, In geveb’s readership skews American at the moment, with more than half of surveyed readers claiming American residence. However, there are also readers in Brazil, Germany, France, Israel, Switzerland, Canada, Lithuania, the United Kingdom, Argentina, Russia, Portugal, Netherlands, Australia, Austria, and Hungary. One reader asked that we widen our focus away from Yiddish in North America—a project that has been on our minds and that we’ll continue to work toward. Age-wise, about half of our readers fall between 25 and 40 years old, with an additional quarter being 65+. Though the sample size is small, we are encouraged that In geveb appeals to many generations of readers, and that we demonstrate in our staff, editorial board, and readership that Yiddish Studies is a field with a vital younger generation. 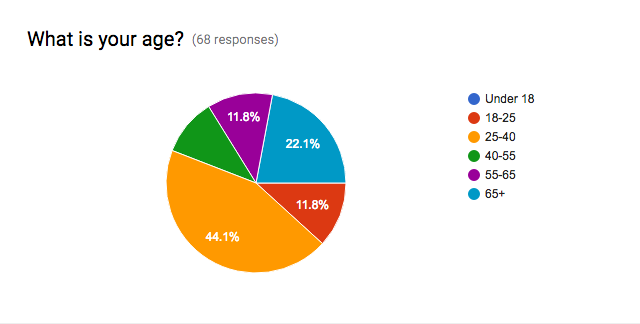 In geveb’s readership is diverse and curious, from Yiddish scholars to burgeoning Yiddishists. Our survey-takers include people of all genders, orientations, religious leanings, and ages, and even includes a professional mathematician! We received thoughtful feedback about the journal, and more than that we learned about the kind of person that takes to the internet to expand their Yiddish community and learning. We also asked our readers where their interests lie, generally speaking, and received answers from poetry and critical theory to Jewish Anarchism, science, and folklore. We were reminded how varied individual ties to and routes toward Yiddish can be. Many readers had Yiddish-speaking relatives or identified religiously or culturally as Jewish to some degree. However, several readers profess no familial or cultural tie to Yiddish culture and a few identified as Protestant or Catholic. The allure of Yiddish is not limited to a particular group of people. Most importantly, along with all the thoughtful criticism we learned that you guys really like us. We will try not to let go to our heads the reader who described us as “attractive, serious, elegant, scholarly, fun, pleasurable” (though this is an excellent description of the editorial team). We hope we can continue providing “Well-supported insights for the modern Yiddishist” and maintaining our standard of being “Eclectic, rigorous, [and] open minded” for years to come.

P.S. — And the reason you really read this piece: who won the tote bag that we offered as incentive to fill out the survey? The answer is Marianne Windsperger! Here she is with our tote at Vienna University. Mazl tov, Marianne, un a dank! 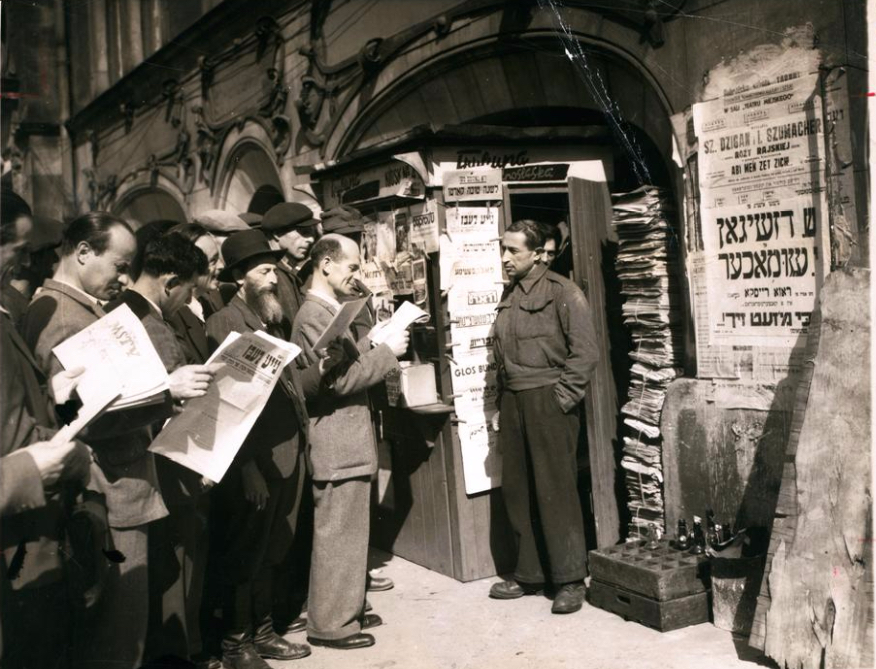 In geveb seeks proposals for Special Issues of the journal. 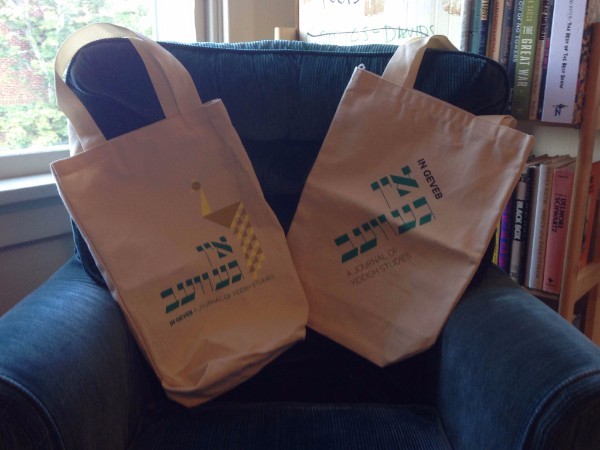 You can still donate to get an In geveb tote!