The klezmer and Yiddish music festival Shtetl Berlin took place online from December 11-13, 2020. It was the first festival held under this name; it is the continuation of the Shtetl Neukölln festival, which in turn grew out of the Neukölln Klezmer Sessions.

When I saw the announcement of the online festival, I was surprised and skeptical. How is it possible to transfer a musical festival online? How can you feel the power of live music through your laptop screen? I thought of attending klezmer concerts and festivals before the pandemic, the thrilling anticipation when you count the days before the event, and the energy that you feel from the stage. The online format would never be the same, I thought.

But the Shtetl Berlin team managed to maintain the magic, although in a different sense.

The first event I attended was the Shabes-Tish on December 11th. I prepared candles and wine and put my laptop on a chair in the middle of the room. That was festive enough, I decided. It was exciting to see my friends from Berlin and elsewhere in the list of participants, and to know that at this moment we were all gathered together to celebrate khanike — the holiday of light and hope — and shabes.

Accordionist Ilya Shneyveys (Forshpil, Dobranotch) and his wife, cantor Sarah Myerson, hosted the event from Brooklyn; they emphasized that anyone could join regardless of religious views, welcoming the audience with a rendition of “Shalom Aleichem.” Then singer and cantor Sveta Kundish blessed the khanike candles, accompanied by accordionist Patrick Farrell and their lovely baby. They joined the event from an artists’ residency in Bavaria, Germany. Berliner Sasha Lurje (Forshpil) blessed the shabes candles. Her partner, violinist Craig Judelman, gave a moving droshe about the meaning of the holiday of khanike. Michael Alpert, who lives in Scotland, said the blessing for wine. I felt as though I were together with them all in the common space of our imaginary shtetl.

After some nigunim came the premiere of a new music video, “Klaybt zikh tsunoyf,” featuring a compilation of separately recorded videos from twenty-five different musicians, including everyone mentioned above. The song, which starts with the words “Gather together, sisters and brothers,” became an anthem of hope in the time of social distancing and lockdowns. It gave me such a great feeling of warmth and heymishkayt that my eyes filled with tears. I was surprised that an online meeting could bring me this much joy.

Sasha Lurje, a member of the organizational team, noted to me in an interview that holding the festival online was not easy: “Being online means you are not in the same space, and it is a challenge to create a loving, friendly atmosphere. We worked very hard to not just stream classes and concerts, but also to create spaces for people to be together, even from the privacy of their own homes.”

But all the efforts were not in vain, she continued. “What can be better than to know that there are people baking bagels together from St. Petersburg to Berlin, from New York all the way to California? We had participants from five continents join us this year! Our small neighborhood festival got to be a worldly affair. We had successful evening programming that was all live. We managed to go deep into Yiddish song and klezmer music, we had a poetry reading and linguistic and historic lectures. And all of that with a feeling of community—our big international community of people interested in Yiddish culture. It felt like a celebration. It felt like a family. It felt like we got to actually be together. That is the most important part of it!”

The festival schedule was intense, and it was hard to choose which sessions to attend, especially since my 8-month-old baby let me attend fewer events than I would have liked to. But I caught Berlin artists Arndt Beck and Anna Rozenfeld’s reading of Avrom Sutzkever’s poetry on Sunday, December 13th. Beck’s new German translation of Sutzkever’s poems and diaries written in Berlin in 1945 was published just a few weeks ago. The book also includes Beck’s fantastic art pieces inspired by Sutzkever’s photographs.

I am not a musician, and I am extremely far from producing music in any form. But I am a devoted consumer of klezmer and Yiddish music. In previous years, I only attended festival concerts, but this time I got a chance to participate in the workshops too. I would have been too shy to do so offline. But to my surprise, I discovered that song workshops can be very enjoyable even if you are not a professional singer. With Sasha Lurje and Daniel Kahn I learned socialist songs of resistance and class struggle in a workshop with the intriguing title “Aleyn Tsuzamen: Yiddish Songs of Community, Commotion, and Communicable Disease.” With Michael Alpert, I learned a folk song “S’iz shoyn shpet,” and was astonished by the complexity of folk music. Of course, I knew that it is not simple, but trying to repeat a melody myself gave me a different perspective than passive listening.

The organizers of the festival plan to continue online workshops regularly starting in January.

“We have been thinking about it for years,” Lurje told me. “We will switch between instrumental and vocal weeks so that people will not have to choose between singing and playing Yiddish music.”

The festival’s main concert on Saturday evening featured six musicians (Alan Bern, Craig Judelman, Christian Dawid, Sanna Möricke, Sasha Lurje, and Daniel Kahn) and two dancers (Yeva Lapsker and Sayumi Yoshida). Usually, such concerts include several dozen musicians, and despite the organizers’ creativity, it was sad to see the reduced size. It was a surreal scene: musicians playing in the empty concert hall of the Jewish Museum in Berlin, standing at least 1.5 meters apart. The concert was only an hour, and unlike most main concerts of klezmer festivals, with their frenzy of sounds and upbeat dancing tunes, the general mood was calm. On the last song, “A gute vokh,” Daniel Kahn carried his infant asleep in a baby carrier. (I am sure that all the parents who watched the concert, myself included, are dying to know the secret of how to lull a child so easily despite the loud sounds.) This last song provided an optimistic ending. The refrain — “gezunt zoln mir zayn, trinken veln mir vayn bizn vaysn tog arayn” — promises a better future, when the pandemic will be over and we will be able to finally meet our friends and loved ones and enjoy live music.

But for now, all we have are online events. On Sunday evening, the festival closed with an international klezmer jam session on Zoom. Bands and musicians from Berlin, London, Saint Petersburg, Brooklyn, and more performed, while organizers invited the audience to join the bands virtually and play along (with muted mics). This funny and light event concluded the whole festival on a positive note. Despite the hardships that 2020 brought, the international Yiddish and klezmer community stays strong, creative, united, and — more than ever -— borderless. 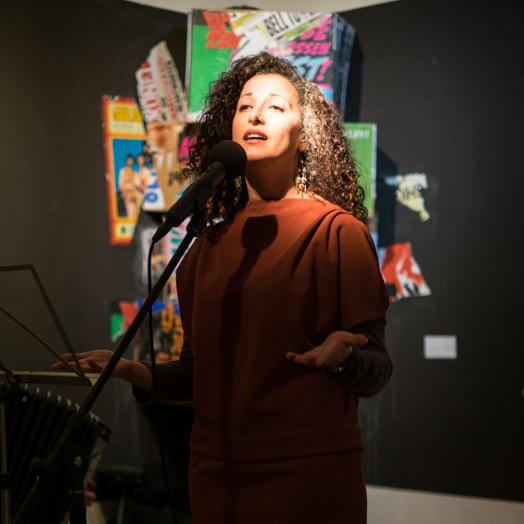 January 19th, 2020. A small gallery in Berlin’s Kreuzberg district is crowded and abuzz to honor the tenth anniversary of the death of Avrom Sutzkever with poetry, music, and visual art. 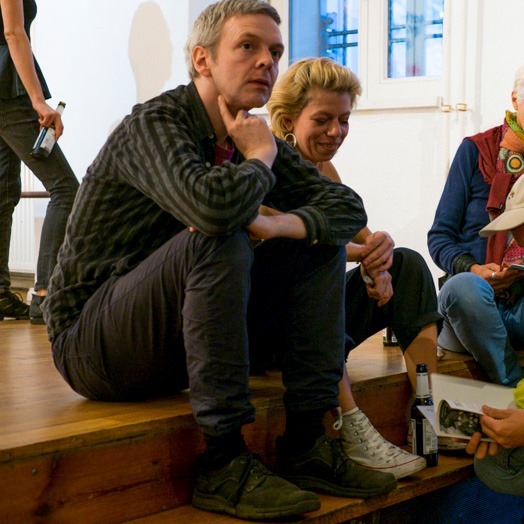