On a sun­ny day in Octo­ber, I am sit­ting with artists Arndt Beck and Ella Poni­zovsky-Bergel­son in Arndt’s kitchen in an old build­ing in Berlin’s Kreuzberg dis­trict. Such build­ings — very com­mon in cen­tral Berlin — have wit­nessed more than a hun­dred years of the city’s con­tro­ver­sial his­to­ry, includ­ing the blos­som­ing of Jew­ish cul­tur­al life in the 1920s. An apart­ment like this could have been a home to the pro­tag­o­nist of Moyshe Kulbak’s ​“Dis­ner tshayld-Harold” or Dovid Bergelson’s ​“Tsvishn emi­grantn.” Today I am here to talk to these two con­tem­po­rary Berlin-based artists and ask them about their way into Yid­dish letters.

Arndt Beck was born in Ger­many in 1973; he is a ver­sa­tile artist, pho­tog­ra­ph­er, trans­la­tor, and active sup­port­er of Yid­dish in Berlin. Ella Poni­zovsky-Bergel­son was born in Moscow in 1984, immi­grat­ed to Israel in 1991, and recent­ly moved to Berlin. She works in a style that she calls hybrid cal­lig­ra­phy. Both artists recent­ly pre­sent­ed their Yid­dish-relat­ed works here in the exhi­bi­tion ​“Di far­bloyte fed­er | Berlin­er zey­des,” held between August 22nd and Sep­tem­ber 3rd in the Zeit­Zone gallery in Kreuzberg. The pro­gram includ­ed a series of cul­tur­al events (lec­tures, con­certs, and movie screen­ings) from Berlin-based Yiddishists.

Ekaterina Kuznetsova: How did you both come to Yiddish, get interested in it, and start to use it in your artwork?

Arndt Beck: For me there was no one straightforward “way to Yiddish.” My first encounter with a Yiddish environment happened in 2011 when I met Fania Brantsovsky and Dovid Katz. When I look back, I see it as a very important meeting. These were the first native Yiddish speakers I met and they impressed me very much. But I did not have the idea then to learn Yiddish. Probably the main reason was Helmut Psotta, whose works I inherited after his death in 2012. I knew that he had some Yiddish roots, and I got the idea that I needed Yiddish to understand his works better. I started to learn the language here [in Berlin], then I went to Warsaw Summer School, and that was the point of no return for me – there was no way back.

Ella Ponizovsky-Bergelson: I don’t speak Yiddish. Actually, most of my life I was very anti-Yiddish. I had very little interest in Yiddish, which followed from the Israeli agenda as it was when I arrived there, in the early 90s. I couldn’t relate to Yiddish. I just knew that it was the first language of my grandfather. I also knew that he never spoke it, and that his father [Dovid Bergelson] was a great author, but that I would never be able to read any of his great books because Yiddish is not translated into any language, and nobody knows anything about it, and it’s forgotten. However, at some point I found out that the image in my head was not true. So I started to get interested and did some research. This is what brought me to Yiddish – my family roots.

EK: How did the repression and execution of Dovid Bergelson influence your grandparents and your family?

EPB: I think it is influencing even me still. Practically speaking, this is what happened when Dovid Bergelson was arrested: My grandfather Lev was in the Russian army, in the Intelligence Forces because German was his second native language; he grew up in Berlin. When he came back from the army, his father was arrested, and Lev was sent with his wife and 5-year-old daughter, my aunt, to Siberia. They spent around 9 years there. When they came back to Moscow, my grandma was nine months pregnant with my mother. So my mother was born right upon their return. But even then my grandparents still did not know what happened to Dovid Bergelson and where he was; the story did not come out yet. There was not a lot of talking from my grandpa about this period. My mother was born into a new world where all of this was just history.

EK: Did you always have a double name, Ponizovsky-Bergelson?

EPB: In my family, we took the name Bergelson when my grandparents died. Dovid Bergelson had one son Lev — my grandpa. Then Lev had two daughters, my mother and my aunt, and each of them also had only daughters. So we wanted the name to survive in a patriarchal society.

EK: When did you present your Yiddish artworks for the first time?

EPB: When I got interested in Dovid Bergelson four years ago, I still lived in Israel. I had to come out of that context to understand that I was allowed to look into my past. In February 2016, I started to read, and in April I had a sole exhibition in Jaffa where I first used quotes from Dovid Bergelson’s “At the Depot” [Arum vokzal]. The exhibition was a lot about transition and movement, and the book is about a railway station where everything is temporary. I wrote the quotes with letters from different languages. What I do in art is hybrid calligraphy — I am interested to see what happens to words and sentences when you change the language or the alphabet. Recently I used Yiddish in the project “Among Refugees Generation Y,” a piece of calligraphy on a wall in the Neukölln district [of Berlin] where Yiddish, Arabic, and German languages are infused.

EK: How did you find the common stream between your and Arndt’s art?

EPB: Through the letters. I saw Arndt’s work and thought — we are doing kind of the same thing. It was already there, the usage of poetry and letters, art inspired by literature. That was the meeting point and from there, the concept of our mutual exhibition developed.

EK: Both of you use a lot of color in your works. What is the symbolism of it?

EPB: At the beginning I was not using much color. I remember the moment when I saw Arndt’s work and told myself that I also needed to do something more colorful. In general my motivation is to break this very black and white image that Yiddish has today because for many people it only exists in the past. If we are bringing Yiddish back to life, to the present and the future, it is better to do it in color to break the stigma and to get rid of this very sad and tragic black and white picture.

EK: For the exhibition you chose to write Kadya Molodowsky’s poem “A papirene brik” with ancient Hebrew script on the gallery wall. What was the message you were conveying?

EPB: The alphabet I used is one of the very first forms of written Hebrew. These letters existed long before ink and paper; they were cut in stone. The meaning of using them for me was to make a point about the place of Yiddish in the world — in my world, in our world, in the Israeli world I come from: “No one can read it.” For most people Yiddish feels as distanced and unreadable as this 3000-year-old alphabet. Apart from that, I wanted to leave the religious connotations that the Hebrew alphabet we know today bears, since for many people the letters are connected to Judaism. But neither I, nor Dovid Bergelson, nor Kadya Molodowsky were religious.

EK: How do you choose the poems that you include in your work?

AB: The first poem for the exhibition was Moyshe Kulbak’s “Ikh bin a bokher a hultay.” I just liked the poem and started to work with it. At the Shtetl Neukölln festival I learned about Mordechai Gebirtig’s “Der zinger fun noyt.” This text felt very close to me, so after the festival I used it in my work. The title of the exhibition, “Di farbloyte feder | Berliner zeydes,” is a quote from a Sutzkever poem. “The blue-inked quill” is a connection to the past; it’s the quill that belonged to the poet’s grandfather, who wrote a comment on a religious book with it and died before he could end the text. The poem is called “Berliner zeyde,” so I made it plural — Berlin grandfathers, hinting to another grandfather — Dovid Bergelson.

EK: Besides being an artist and Yiddish activist, you also translate, right?

AB: Yes, I find it very hard to define myself as only a photographer, or an artist, or a translator. I constantly jump from one activity to another. I got very interested in Sutzkever in general and in his relationships with Berlin, which are very sparse because the poet was here only twice, but he wrote poems about Berlin. One of them is “Brandenburger tor,” which was not translated for 70 years. I wondered why. I collected his seven poems about Germany, three of which are about Berlin, and also his diary from his journey to the Nuremberg process, and started to translate. I used Sutzkever’s pictures for the exhibition as well.

EK: What were your expectations from the exhibition and your impressions afterwards?

EPB: I didn’t know what to expect at all, because as I said, it is a very new scene for me. Arndt knows much more about it and is very connected to Berlin’s Yiddish environment. I was very surprised to see how many people are engaged in it, and how diverse this environment is.

AB: For me, the goal was to bring different parts together, because there are different sides of Yiddish in Berlin, and sometimes these sides don’t even know about each other. There is an amazing klezmer scene, a group of Yiddish studies scholars, artists, who all exist in their own circles — despite all the possibilities of social networks. For me it worked very well, and the events program on the exhibition included concerts, lectures, poetry readings and indeed showed the multiple aspects of Berlin’s Yiddish world. It was also great that we did this project basically out of nothing — we had no money, no sponsors’ support. And in the end I was very happy with how many people agreed to participate, and how large an audience we got.

Arndt Beck is planning a new exhibition and event on January 18th honoring the tenth anniversary of Avrom Sutzkever’s death. In August 2019, Ella Ponizovsky-Bergelson painted another mural in the framework of the “Among Refugees” project. In the mural, a short phrase in Yiddish, “A tir gegn a tir” (“A door against a door”), originally from Bergelson’s “Tsvishn emigrantn,” is written repeatedly with intertwining letters from different alphabets, inviting everyone who sees it to reflect on the questions of diversity, identity, and connection between past and present.

Kuznetsova, Ekaterina. “In Search of “Berlin Grandfathers”: An Interview with Arndt Beck and Ella Ponizovsky-Bergelson.” In geveb, December 2019: https://ingeveb.org/blog/in-search-of-berlin-grandfathers-an-interview-with-arndt-beck-and-ella-ponizovsky-bergelson.

Kuznetsova, Ekaterina. “In Search of “Berlin Grandfathers”: An Interview with Arndt Beck and Ella Ponizovsky-Bergelson.” In geveb (December 2019): Accessed Sep 28, 2022. 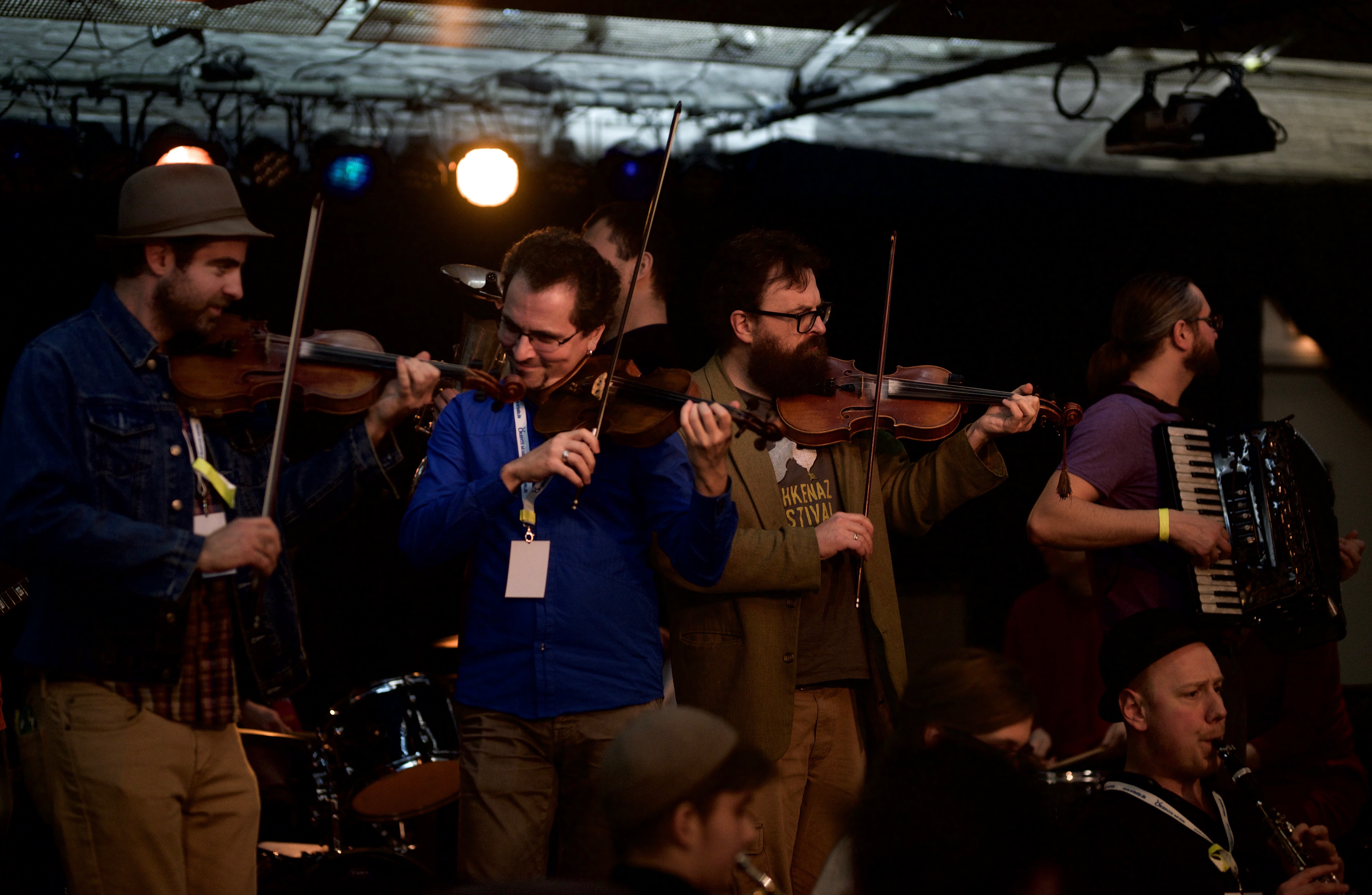 Klezmer singers and musicians gather in Berlin to make joyous new sound together.

Memorializing the Holocaust in Electronic Music: An Interview with Francisco Dean

Jo Sabath talks with Francisco Dean about Dean’s Frilingdik Umbazigt: As the Spring Unconquered, an electronic music piece memorializing the Holocaust that he composed and directed with high school student musicians at the Chicago Laboratory School.