Holding hands, two women face the audience. They stand awash in emerald light, their heads thrown back towards something that falls from above. As they shake their hair and laugh, we intuit that what is falling must be rain. “It all starts with this moment,” narrates Lemml, a character in Paula Vogel and Rebecca Taichman’s Tony Award-winning play Indecent.

As we are starting to learn, Indecent is a play about a play.

Lemml has just introduced himself as the stage manager for Yiddish playwright Sholem Asch’s God of Vengeance, a love story between Rifkele, a brothel owner’s daughter, and Manke, the prostitute who lives downstairs. “Remember this,” Lemml instructs as the two lovers—Rifkele and Manke—twirl together in the rain.

Then: a blink in time.

The lights brighten, “Ale Brider” begins to play, and we are somewhere else now, the two women part of the ensemble’s circle dance.

This will not be our last encounter with the rain scene, nor will it be the last time that characters, moments, and places fold seamlessly into one another. Vogel and Taichman blend facts with imagination to retell the history of Sholem Asch’s God of Vengeance, which stands apart from other early twentieth-century Yiddish and American plays for depicting a love affair between two women. 1 1 Johnson, Katie N. Sisters in Sin: Brothel Drama in America, 1900-1920 (Cambridge: Cambridge University Press, 2006). Indecent weaves together excerpts from God of Vengeance with its behind-the-scenes drama (both fictional and real) to bring Yiddish theater history to life.

Indecent’s palimpsestic dramaturgy enables it to retell Ashkenazi Jewish history via the transnational circulation of God of Vengeance. Choreographer David Dorfman’s synchronic vignettes range from rousing renditions of the Hora to languid duets between characters whose orbits may or may not collide. Composers Lisa Gutkin and Aaron Halva’s klezmer-infused soundscape amplifies the storytelling as it dips from joyous classics to harrowing unease. Lighting designer Christopher Akerlind’s rich palette of reds and blues eases the actors’ transitions across layered planes of reality. Throughout it all, Taichman’s precise direction enables her astoundingly talented ensemble to slip between the multiple characters they each embody, and to move seamlessly across international, social, and linguistic borders.

Indecent’s characters speak primarily in accented English with occasional slips into Yiddish that are translated via supertitles. However, Yiddish remains at the heart of the historical experiences that Indecent represents, particularly in relation to the play’s engagement with antisemitism and queerness. For centuries, living amidst antisemitism has led Ashkenazi Jewish institutions to devalue Yiddish—among several Jewish languages such as Judezmo and Judeo-Arabic—privileging the language of the dominant culture or Hebrew instead. Post-World War II, queer Jews and leftists who have seen themselves in Yiddish’s marginalized status have reclaimed Yiddishkeit as a living culture. 2 2 Shandler, Jeffrey. “Queer Yiddishkeit: Practice and Theory.” Shofar: A Journal of Interdisciplinary Studies, 2006, 25:1. 90-113. In light of the historical relationship between Yiddish, antisemitism, and queerness, what might Indecent’s engagement with Yiddish offer us today?

In Indecent, the layered cultural meanings that accompany Yiddishkeit are evident from the very first reading of God of Vengeance in Y.L. Peretz’s salon (1907). In light of rising antisemitism in Eastern Europe, Peretz (who is known for persuading Jewish authors to write in Yiddish rather than Hebrew) insists that Asch write a play where Jews are honorable citizens rather than prostitutes and pimps. Asch, however, insists on representing the full range of Jewish experiences. Asch dreams of Jewish playwrights being produced in every language and on every stage. “Who is your audience?” Peretz implores. As Indecent soon reveals, God of Vengeance finds audiences in Berlin, Constantinople, Bratislava, and New York City.

On New York City’s Lower East Side, an off-stage romance blooms between the Yiddish-speaking actresses playing Rifkele and Manke. The actress playing Rifkele shares that this is the only role in her life where she will be able to tell someone she loves that she loves her on stage, and we are reminded that God of Vengeance lies at the crossroads of queer Jewish history and American theater history: the kiss between Rifkele and Manke is the first kiss between two women on a U.S. stage.

In Indecent and in history, the Yiddish performances of God of Vengeance are such a hit that the play is translated into English and produced on Broadway in 1923. With that comes a shift in the play’s relationship to queerness. Indecent takes us to a full cast meeting before the ensemble’s Broadway debut, where we learn that Rifkele and Manke’s most intimate love scene, the rain scene, has been cut. What’s more, the Yiddish speaking actress who plays Rifkele is fired in lieu of a native English speaker. As one ensemble member says, the storyline must be adapted to meet the tastes of its gentile, English-speaking audiences.

Without the rain scene, God of Vengeance loses much of its nuance and risks portraying its characters in an antisemitic light; for example, Manke becomes a caricature from the Jewish underworld during an era when Jews were disproportionately blamed for their involvement in the sex trade. Moreover, cutting the rain scene censors Manke and Rifkele’s full expressions of their desires. What would the goyim think if they knew that Manke was not only Jewish and a sex worker, but that she and Rifkele were in love?

The perceived fear of antisemitism haunts opening night at the Apollo Theater, where a police officer waits backstage to arrest the God of Vengeance cast for obscenity. In a suave slight of hand—another blink in time—the police officer removes his hat and jacket to reveal a kippah and tallis beneath. He transforms into a high-falutin’ uptown Rabbi who reveals that he filed the official complaint against God of Vengeance. The antagonists of Asch’s play were not only the goyim, but also other Jews. 3 3 Erdman, Harley. “Jewish Anxiety in ‘Days of Judgement:’ Community Conflict, Antisemitism, and the God of Vengeance Obscenity Case,” Theatre Survey, 1999, 51. As God of Vengeance moves from downtown to uptown, Yiddish to English, queer to straight, we can see the ways in which internalized antisemitism pits Jews against each other and creates the conditions for Jews to police other, queerer Jews.

Beyond Indecent’s metatheatrical portrayal of God of Vengeance, the production history of Indecent is historic in its own right. Indecent marks the Broadway debut of Pulitzer Prize winning playwright Paula Vogel, which is both shocking in light of Vogel’s talent and acclaim, and not at all surprising in light of the unequal power structures that permeate the theater industry. Recently, women artists and academics have called attention to white male critics’ unfavorable reviews of esteemed female playwrights such as Vogel and Lynn Nottage, and demanded that news outlets check their privilege and change. 4 4 Alker, Gwendolyn et al. “A Collective Call Against Critical Bias,” How I Round, 26 June 2017, http://howlround.com/a-collective-call-against-cri...

Inevitably, the patriarchal systems that female playwrights are subjected to extend beyond the theater. It is my hope that queer Jewish plays such as Indecent will strengthen artists and audiences’ support for indigenous and queer-of-color led campaigns. It is my hope that these movements will redistribute the unequal resources, access, and wealth that institutions such as Broadway perpetuate and maintain.

What has changed since the original God of Vengeance cast was arrested for obscenity? Whereas the 1923 Broadway producer cut the rain scene, in 2017 Manke and Rifklele perform it in full. Real water pours from above as the physical and emotional intimacy between the two women deepens. Sitting in the audience, I notice that something else has shifted but at first I can’t tell what it is. Chills rush up and down my arms as my ears adjust. For the first time in Indecent, Rifklele and Manke speak to each other not in English, but in Yiddish. As they speak, no supertitles are projected. It is as if the purpose of the entire play was to prepare audiences today, Jews and non-Jews alike, to understand this scene from God of Vengeance in Asch’s native language.

“Remember this.” I recall Lemml’s invitation and sadness overcomes me. For many early twentieth-century audience members on New York City’s Lower East Side, fluency in English was nothing but a dream. Today, I, a native English speaker, dream of exchanging English for a Yiddish mother tongue. Rifkele and Manke hold each other close, and my sadness lifts into joy, albeit evanescent. Joy that Indecent lets two Jewish women love each other in Yiddish, and lets us feel their poetry wash over us like rain. 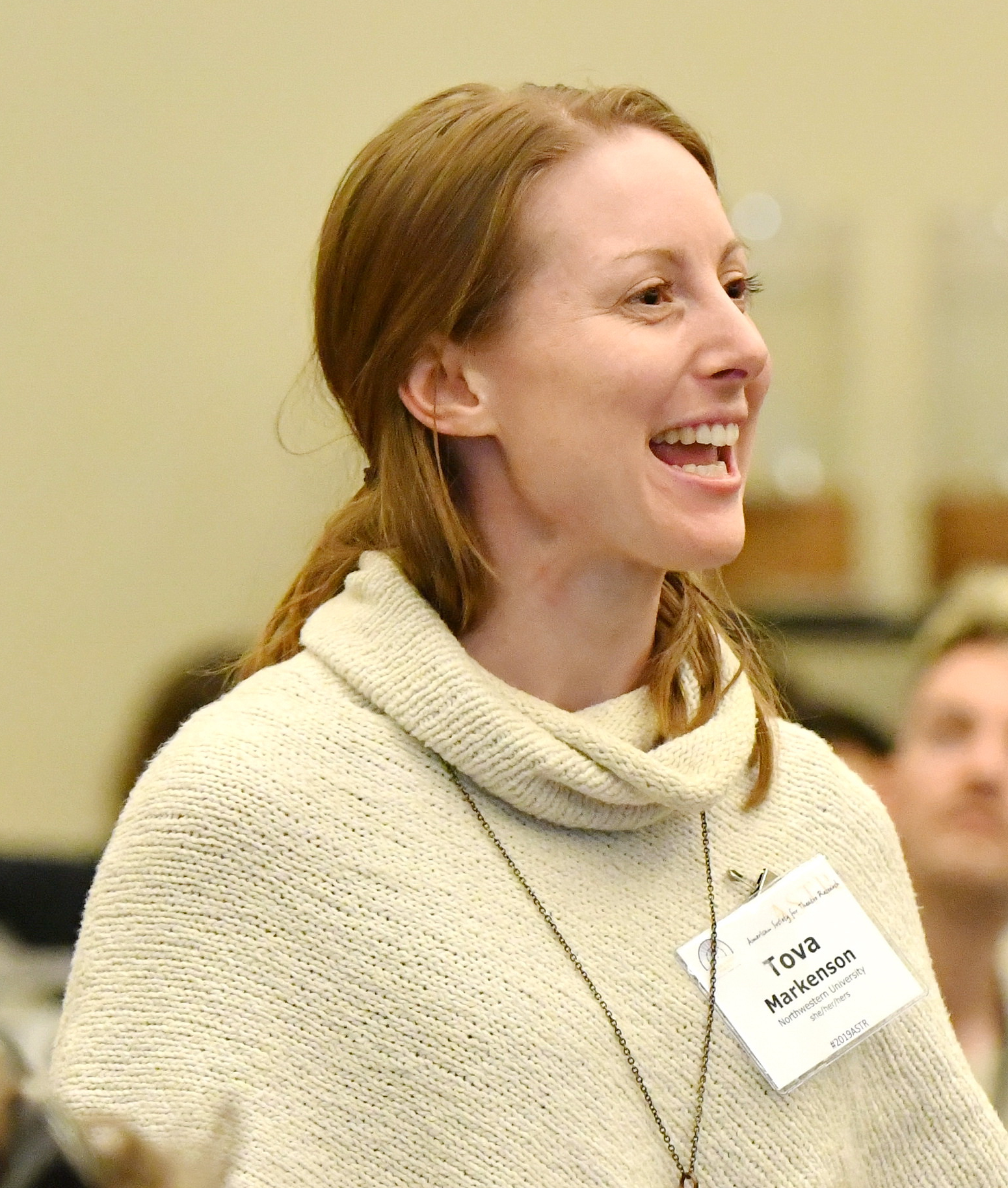 C. Tova Markenson is a postdoctoral fellow at the Center for Research on Antisemitism at Technische Universität Berlin. 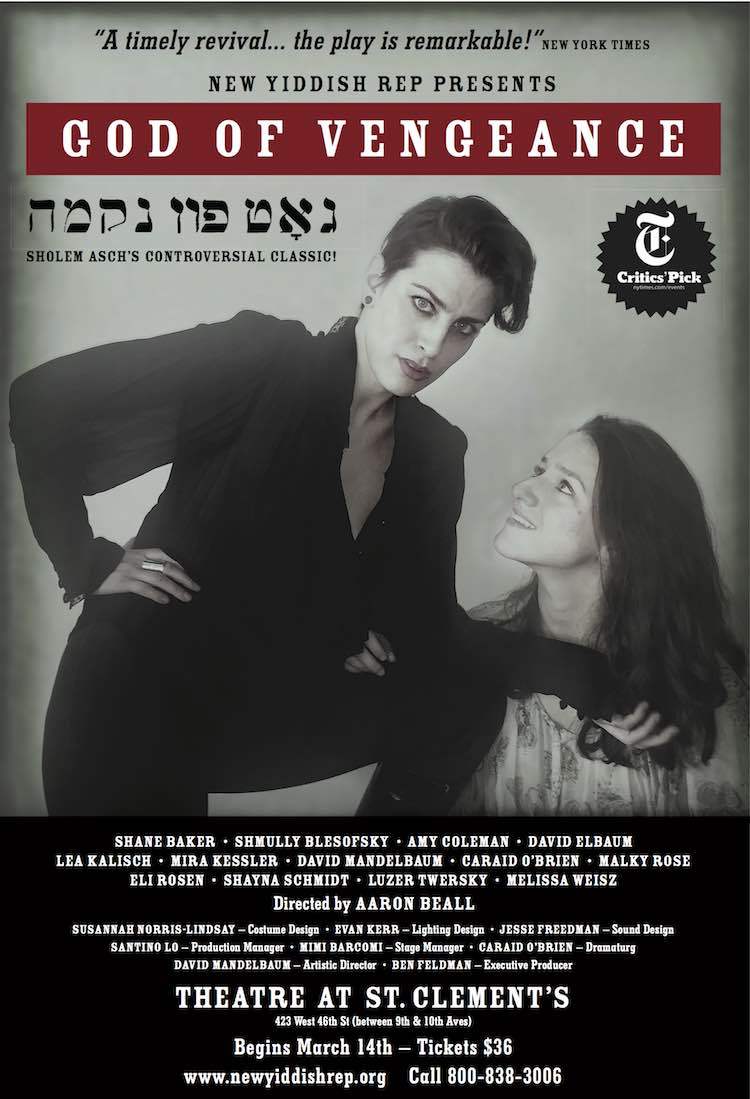 Just in time for the new spring run, a review of the New Yiddish Rep’s production of Sholem Asch’s (in)famous play.

Amerike – The Golden Land is Yiddish in Form, Nationalist in Content

Tova Benjamin on seeking authenticity at the theater.