Deb­o­ra Vogel’s 1935 essay, Lwows­ka Jud­e­ria, gives us a valu­able snap­shot of Lwów’s 1 1 Today the city is the Ukrain­ian Львів [Lviv], though it is per­haps best known to read­ers here as ​“Lem­berg,” fol­low­ing the Yid­dish לעמבערג. This is the cap­i­tal city of the his­tor­i­cal region Gali­cia. Lwów (some­times angli­cized as ​“Lvov”) was the offi­cial name at the time Vogel wrote this piece (in Pol­ish), as the region was Pol­ish from 1923 to 1939. Jew­ish streets with an eye to the modern. 2 2 The sketch was orig­i­nal­ly pub­lished in the Jew­ish-Swedish jour­nal Jud­isk tid­skrift (1935). It was next pub­lished in 1937, in Almanach i Leksykon Żydost­wa Pol­skiego, [Lwów] 1 (1937): 89 — 98. It is trans­lat­ed here from the reprint which appeared in Deka­da Lit­er­ac­ka (1991), and in con­sul­ta­tion with the Ger­man trans­la­tion in Deb­o­ra Vogel, Die Geome­trie des Verzichts: Gedichte, Mon­ta­gen, Essays, Briefe, trans./ed. Anna Maja Misi­ak (Wup­per­tal: Arco Ver­lag, 2016). On the one hand, it pro­vides us infor­ma­tion on the vibrant Jew­ish life in the city — which was large­ly anni­hi­lat­ed by World War II — and on the oth­er, it is a poet­ic text that reflects Vogel’s unique aes­thet­ics, illu­mi­nat­ing and pro­vid­ing con­text to her (more) cre­ative work.

As in her poet­ry, Vogel anthro­po­mor­phizes streets and build­ings: “[The ren­o­vat­ed streets] are use­less, con­fused, inde­ci­sive. They ape reg­u­lar­i­ty, they attempt to pass them­selves off as nor­mal.” Human desires dri­ve urban­iza­tion, class mobil­i­ty is made vis­i­ble by its impact on the built envi­ron­ment. At the same time, Vogel objec­ti­fies human bod­ies, as the pop­u­lat­ed city is described as ​“an emp­ty, irreg­u­lar space full of strange figures.”

I am great­ly indebt­ed to Anna Maja Misiak’s Ger­man trans­la­tion, since, in addi­tion to its being more com­plete than the appar­ent­ly short­ened (pre­sum­ably due to lim­it­ed news­pa­per space) reprint of the orig­i­nal in Deka­da Lit­er­ac­ka, I have full com­mand of Ger­man but only mea­ger Pol­ish. I real­ize that trans­lat­ing trans­la­tions is shaky ground, but I leaned heav­i­ly on the Pol­ish orig­i­nal at every doubt. I also felt that since I have trans­lat­ed Vogel’s Yid­dish poet­ry, I have devel­oped a sense and a vocab­u­lary for her voice in Amer­i­can English.

My rudi­men­ta­ry Pol­ish was strength­ened by the aid of Pol­ish yid­dishist Anna Rozen­feld, who ana­lyzed the orig­i­nal with me for tone and voice, insight­ful­ly point­ing out that the street names should be kept in Pol­ish in my trans­la­tion. Where these play a nar­ra­tive role, Eng­lish gloss­es are pro­vid­ed. I also felt that the casu­al read­er should also be able to type these streets into their com­put­er-aid­ed map­ping soft­ware of choice and see how things look today, so where applic­a­ble I pro­vid­ed the names in translit­er­at­ed Ukrain­ian in the footnotes.

Thus, Lwów’s Jew­ish Quar­ter, in which Vogel brings the Lwów of near­ly a cen­tu­ry ago into ​“grey tangibility.”

Center and periphery have always existed— elastic and static, life that flows by in still, flattened waves. This applies to Jewish Lwów, and to all Jewish neighborhoods in the world, which always lie slightly off of life’s beaten path.

Strolling through Lwów, you might be fooled into thinking the city center was wrapped in two semi-circles of Jewish streets. In reality, the streets form a single half-circle, beginning in the east of the city, and then filling in north. As the city becomes sparser to the south and west, the Jewish streets grow calmer and eventually peter out, bunching together into two larger, compact units. Solitary particles get beamed out from these into other far-flung, elegant neighborhoods. The grotesque figures of junk-dealers and bottle, rag, and paper collectors travel the farthest. “Old Rags, Clothing, and Iron Bought!” “Trade in Your Old Silverware for New!”

The long, apathetic Krakowska Street connects both groups of side streets. It is a sort of traffic artery in the snarl of the south-city traffic. The streets grow emptier and emptier as they lead out of town. Boimów, 3 3 Today named Staroyevreyska Street. Current Ukrainian names of still-extant streets will be given in footnotes (in English transliteration) unless they are transparently similar to Vogel’s Polish. See https://www.lvivcenter.org/en/streets for more former names of Lemberg’s streets.
Serbska, Blacharska 4 4 Today named Fedorova. Streets— who would say these are close to the center of town?

Ancient, ornamental gates continue the stately baroque style of the market square— a cornice formed by a segmented lion, a chimera, an ornamental grapevine. Then long passageways full of shops. Looking at this street, the Yiddish poet Iceland comes to mind: Smell of cinnamon and cloves.

Yet another reality keeps us from seeing life here as decorative. The perspective imparted by tragedy has us see something different. It illuminates the gray, the decayed, throws stalls and naked hands full of “product” into stark relief. A dozen cheap ties, handkerchiefs (ten for one złota), hairclips, safety pins. An egregious scene repeats itself several times a day — the “untaxed” products get confiscated.

And here’s Serbska Street. Cool gates smell of mold, old iron, and dreams. Their arches are held up awkwardly by crooked columns and adorned with carved stone and key motifs. Tiny businesses proliferate. Little wood constructions, so small that a hawker and their wares barely fit inside. It is truly a mythical landscape, like a sad, hopeless fable.

We’ve repeatedly circled this strange, hapless streetscape with its sad mix of exotic and brutal everyday life. Now let’s go into the courtyard of one of the apartment buildings on 27 Blacharska Street.

Here is one of the oldest synagogues in Lwów, the “Golden Rose.” Sloping beams support its walls. The entryway is decorated by a single leaf ornament, and inside is a beautiful altar in the Renaissance style. This synagogue, built in 1582, has its own legends, its own gleam. It is said that a beautiful Jewish widow, Rosa, sacrificed herself to spare the synagogue from the violence of the Jesuits. Thereafter, she committed suicide inside the shul, which has borne her name ever since.

Now let’s turn back down Krakowska Street on our way to another group of side streets. The main drag there is called Smocza [Dragon] Street, 5 5 Today named Pidmurna.
one of many with fantastic names. They are still a ways off, and we will meet more pavements, faces, destinies on the way.

Żółkiewska Street appears next. A faceless, flat, banal street. Half-provincial, half-urban. (A uniform, one-story apartment building with a wide, dirty, gate that has fallen into disrepair. Sixty years ago, my great-grandfather lived here. He was known as “the silken Jew.” Reb [Abraham] Nisan Süss— a kabbalist with a secular education, a treatise-writer and publisher. He is said to have exuded an aura of quiet celebration. He would wear a satin caftan and round sable hat on workdays, probably as an expression of the celebration that enveloped him. He is exemplary of an entire generation, of a way of life where a person’s whole existence and every joy seeped into their limited everyday life. It was a life perpetually cloaked in satin; one not bothered in the least by the fact that the ghetto’s border, where the Jewish world ended, was a short distance away.)

Off of Żółkiewska, the side streets fall sharply towards Słoneczna [Sun] Street. Narrow, crooked, abandoned streets form four concentric circles. The last of these is Słoneczna.

Where does this name come from? It is hard to imagine that this sober and utilitarian-looking street could serve any other purpose than a shortcut, if it is even necessary to visit this neighborhood. It truly stirs no thoughts towards the beautiful. And yet, Słoneczna Street actually proves to be quite sunny, coming out from narrow, forlorn Łazienna [Bath] Street, or from Pod Dębem [Under the Oaks] Street.

The east end of Słoneczna Street opens onto Teodor Square, which is called “Paris” in suburban slang. There is no doubt that it dominates the area: an empty, irregular space full of strange figures. It is an expanse of sundry, cheap life, hawked wares; a zone of insecurity and indifference. It is in the style of Berlin’s Alexanderplatz or Montmartre in Paris, but a Jewish version. So it’s full of overwhelming sadness and lack of faith; utterly devoid of the sweeping, decisive galvanization that imprints certainty and stability of existence onto one’s lump of a life.

The restless, unruly Kazimierz Wielki Street presses in on the left of Słoneczna Street, leading out “to the world.” Behind it, the last gasps of the Jewish Quarter: somewhat wider and more comfortable streets, that are duller, banal. Well not exactly banal, just average, “renovated” streets that in being cleaned-up have lost their essence. They are useless, confused, indecisive. They ape regularity, they attempt to pass themselves off as normal. Alembeków [Alembic], 6 6 Today named Tamanska. Kotlarska [Kettle Maker], and Berka Joselewicza Streets. 7 7 Today named Balaban Maera. (On one with flat, empty façades, my grandfather Jakob Ehrenpreis spent long years of his quiet, good, careful life at Kotlarska 14. He was married to one of Süss’s seven daughters, who is now buried in Stockholm cemetery. Jakob Ehrenpreis, “the Jewish Otto Hartleben,” wrote popular pieces on current events like the Beilis and Dreyfus affairs and the Russian pogroms. A printer and publisher, he lived mainly off of his writing. His Jewish stories were printed in the thousands and distributed across all of Galicia. That is what one old Lwów Jewish family looked like, a snapshot of their life and work hidden from the rest of the world.)

In this world of bastardized streets and their attempts at emancipation, at assimilation, we long for the ghetto. It pulls us back. Back through Słoneczna Street. Now we arrive at a rectangle crunched between Żółkiewska and unruly Teodor Square in three parallel layers.

It’s a hot June afternoon. Spellbound as if by an awkward, miniature toy, we stroll down streets with fantastic names. Here and there, bleached, renovated buildings look down, whitewashed and sober, at the passersby. The buildings here seem more miserable and randomly placed than the ones on Boimów or Serbska Street, and still we ask: Why whitewash them? It’s no use, just makes it harder to decipher the buildings’ true essences.

I’m looking for Smocza [Dragon] Street. I want to see it at this tired noontide hour that so resembles its soul… I look for it through the street noise on Łazienna [Bath], Starozakonna Boczna [Old Testament], and Gęsia [Goose] Streets.I imagine I’m in a foreign city. Maybe the illusion of being a stranger will help me decipher their names. Finally, there it is. It’s disappointing, but that was to be expected. Its name agrees neither with the banal, crooked buildings, nor the toy-like signs. These paintings on tin, that directly describe primitive businesses and products— what do they have to do with a dragon?

Disappointed, yes, but, at the end of the day, content too. The disappointment brings everything back to order. It helps us to overcome the false exoticism that we are prone to cast over alien cities and streets. They reveal everyday life, a well-known pattern. Cookie-cutter lives caught between birth, marriage, death; preparation for what is to come constantly hanging over them. The kind of life that Chagall captures in his shtetl scenes from Vitebsk. 8 8 In Belarus. Also known as Viciebsk.

Jordan Lee Schnee is a German-American writer, musician, and translator based in Berlin.

This special issue invites you to walk with Debora Vogel as she maps the spaces of Jewish life through avant-garde forms. We bring together new perspectives on Vogel through poetry, visual art, translation, and scholarship, all in an attempt to follow the many lines of creative and critical inquiry that emerge from Vogel’s work. 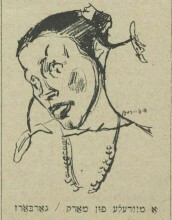 By considering the image of the streetwalker in Manger’s and Vogel’s work, this article deepens the understanding of Yiddish creativity as ultimately multimodal and interconnected. 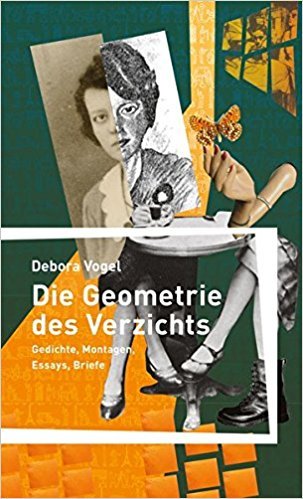