Community, Continuity, and Celebration: Kids and Yiddish Then and Now

Community, Continuity, and Celebration: Kids and Yiddish Then and Now

“Yiddish culture is our family business,” is how my uncle, Moish Mlotek — past president of the Arbeter Ring, treasurer of the Forward and president of the National Yiddish Theatre Folksbiene — puts it. My grandfather, Yosl Mlotek, served as the editor for the Forverts as well as the education director for the Arbeter Ring for many years. His sister, Sore Rosenfeld, was a key organizer of KlezKanada as well as a founder of the National Yiddish Book Center in Amherst among other notable Yiddish projects.

As a producer and writer, my grandfather would send Yiddish acting troupes all over the country through the Folksbiene, which was then a wing of the Arbeter Ring. My grandmother, Chana Mlotek, was his life’s partner in this work, as the music archivist at the YIVO, an editor of the Weinreich dictionary, and a columnist at the Forverts. My grandparents’ column, Perl fun der Yiddisher Poezye (Pearls of Yiddish Poetry), served as the basis for what would later come to be their multi-volume collection of Yiddish songs.

My father, Zalmen, worked as the cultural director for the Workmen’s Circle for many years in addition to his own musical projects. As children, my brother and I would participate in Pripetchik, a Sunday school for kids from Yiddish speaking homes, and we would always join the throngs of children singing at the Arbeter Ring cultural seder.

At the heart of my family’s work was introducing new generations to the vibrant color of Eastern European Jewish life before the war. Under my grandfather’s leadership, numerous records were recorded through the Arbeter Ring, including one of my favorites, “Mir bagrisn,” featuring a children’s chorus of the Workmen’s Circle, musically directed by my father. Di goldene keyt — the golden chain of cultural transmission — was always front and center at every family and public affair.

It is in this cultural milieu that Kids and Yiddish came to be.

In 1993, my father invited Adrienne Cooper, Joanne Borts, and Michael Fox to prepare a show for the yearly benefit for the Arbeter Ring shules. They created a concert of Yiddish songs; my father was the musical director, and Fox composed some original material to include. The show was mostly for adults, not kids, but it was clear there was something worth pursuing. As a five year old, I apparently sang “Eyn Mol Zumer Bay Der Nakht” in that first show, though I have no recollection of it.

When my father and Eleanor Reissa took over leadership of the Folksbiene Yiddish Theatre (later the National Yiddish Theatre Folksbiene) in 1998, my father invited the original concert creators to create a new show called Kids and Yiddish, based on the Workmen’s Circle school concerts.

Borts, Fox, and my father teamed up to reboot Kids and Yiddish for a new generation, with laughter, fun, silliness, and Yiddish at its center. Fox was the show’s principal songwriter, Borts was the show’s director and script writer, and my father was the musical director. When the revamped show premiered in 2000, it introduced more new material and, most crucially, featured children as key cast members. Joanne Borts, the director, often would turn to us kids — the same age as the intended audience — to see whether a joke landed. The show was a success, with rave reviews from The New York Times. It ran every Hanukkah season for about ten years. The theatre even recorded a CD with some of the original cast members, including my brother, cousin, and myself.

Both Fox and Borts grew up in rich Yiddish cultural homes. As Mike Fox puts it, “I learned Yiddish with mother’s milk.” Fox’s father, Chaim Leib Fuchs, was a respected Yiddish poet. Yiddish publications were all over their house. Fox found community at Camp Hemshekh, a summer camp set up in the late 1950s by Holocaust survivors active in the Bund, where my family also worked.

Joanne Borts, too, was raised in an Arbeter Ring and Yiddish cultural family. Borts had been a very active member of the Arbeter Ring. In fact, it was in mitl shul, as a tween, where she met my father as her music teacher, describing him as a, “hip, cool, Yiddish Elton John.” For Joanne, Yiddish was the way she communicated with the people she loved most. (She did note that she was learning klal Yiddish at shule even though all her family friends were speaking with Polish and Ukrainian dialects).

For the show’s authors, Kids and Yiddish was a fun, playful, entertaining introduction to Yiddish for children who had little exposure to Yiddish but whose parents had enough interest to bring them to a show. The material was simple: letters, numbers, words. For Fox, it was a way to make Yiddish relevant and part of the Jewish consciousness of essentially secular children. For the authors it was a reminder too. As Borts described, their Yiddish had always been in technicolor, and that was the way it needed to be presented to kids.

The second year Kids and Yiddish took the stage was just after 9/11. Mike Fox told me that he remembers wondering, ‘How could we have a funny, light show so soon after?” That’s when he wrote Regnboygn, which soon became the show’s beloved anthem. Fox wrote me that the song was an “indirect consolation of the tragedy that stated the world was still basically beautiful and humanity fundamentally good.” He added: “The image of the rainbow is from Noyakh. It symbolized that God would not destroy the world again. No one had to say why the song was in the show. Everyone in the audience understood and wept silently and also felt comforted.”

And so the show would be updated year after year, with new material and more cultural references riffing off current events. Parodies of popular TV shows, movies, and pop music were included so that, as Borts wrote, “even if the Yiddish wasn’t immediately recognizable to our audience, the familiar sights and sounds made learning that much easier and more engaging.” Harry Potter became Hershl Puter; YMCA became Nun, Gimel, Hey, Shin; I’ve Got You Babe became I’ve Got You, Beyz; Sounds of Silence were Sounds of Lamed; and so on. It was a spoonful of Yiddish sugar all around.

That was all nearly twenty years ago. In April 2020, I organized an online Yiddish cultural seder, based on the seder my grandfather Yosl Mlotek used to lead for many years at the Arbeter Ring. I produced the 2020 version with my cousin, Yiddish actor, playwright, and producer Moishe Rosenfeld. Isolated and in quarantine, some of the leading stars of the Klezmer and Yiddish performing arts world came together from Berlin, Amsterdam and New York to feel a khavershaft, a sense of friendship and communal belonging as we remained isolated in our own homes. It was a huge success, with over 1,300 people from all over the world tuning in live to our Facebook concert and raising money for immigrant families through the United Community Services of Westchester. A few thousand more tuned in once the event was up on YouTube.

We were turning to the screen more than ever before. That’s when I turned to my brother and father and asked: wouldn’t it be special if we could remount a reunion show of Kids and Yiddish?

I reached out to the original authors to see if they were interested in rebooting the old show for an online audience as a benefit for the National Yiddish Theatre Folksbiene. With their blessing, my brother Elisha and I set to work.

We contacted every musician and actor who had been involved with the runs of Kids and Yiddish over the years to see if there was interest. There was an enthusiastic response from the participants, many of whom were older and now had kids themselves, like my cousin Marissa, Rebecca Levy, and myself.

My brother and I set to work picking some classics from the Kids and Yiddish repertoire (Oyrobics, Alter Donald, Regnboygn, Calypso). I wrote some new material — a sketch in which Grandma, the original show’s beloved family puppet and prominent voice on the Kids and Yiddish CD, Zoomed with Mr. Landsman, a Yiddish, heymish Mr. Rogers character I created in a YouTube series during COVID. When the theatre was open, we relied on the ingenuity of costume and set designers like Tine Kinderman and the original grandma puppeteer herself, Jenny Romaine. Now, isolated at home, actors were encouraged to make use of whatever materials they had lying around the house.

Quarantine conditions meant we could not sing together at the same time over Zoom. It meant we could not be in the same room recording at the same time either (save the Mayer family pod). And so we relied heavily on our video editor, Elisha Mlotek, to collect all our dissonant voices and make them sound like a cast of characters singing together. We knew that the quality of video had to be on par with other streaming content. We also knew that because this piece would live online, everyone in the world would have access to it (albeit for a short period of time). In the 1990s and 2000s when Kids and Yiddish ran, you had to run to grab a ticket on a cold December morning. But now that the theatre has closed, our living rooms are transformed into theatre halls.

Kids and Yiddish was indeed a labor of love. Though the online reunion show could only be seen online for a limited time due to Actor’s Equity laws, we hope it brought a bit of sunshine during an otherwise lonely quarantine. It was a wonderful reminder that a spoonful of Yiddish still has the power to lighten up a dreary day.

Mlotek, Avram. “Community, Continuity, and Celebration: Kids and Yiddish Then and Now.” In geveb, December 2020: https://ingeveb.org/blog/kids-and-yiddish-then-and-now. 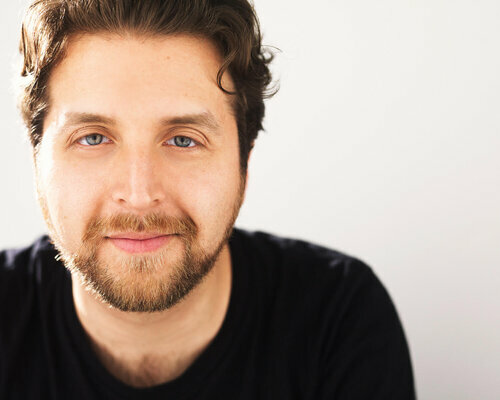 Avram Mlotek is the author of Why Jews Do That or 30 Questions Your Rabbi Never Answered and can be followed on Instagram at @avrammlotek and Twitter on @RabbiAvMlotek. avrammlotek.com

The abundance of “eternal grandparent” figures in Jewish children’s literature begs the question: Which bubbe and zayde are right for you?

Calling all kinderlekh: In geveb is seeking children's book reports! 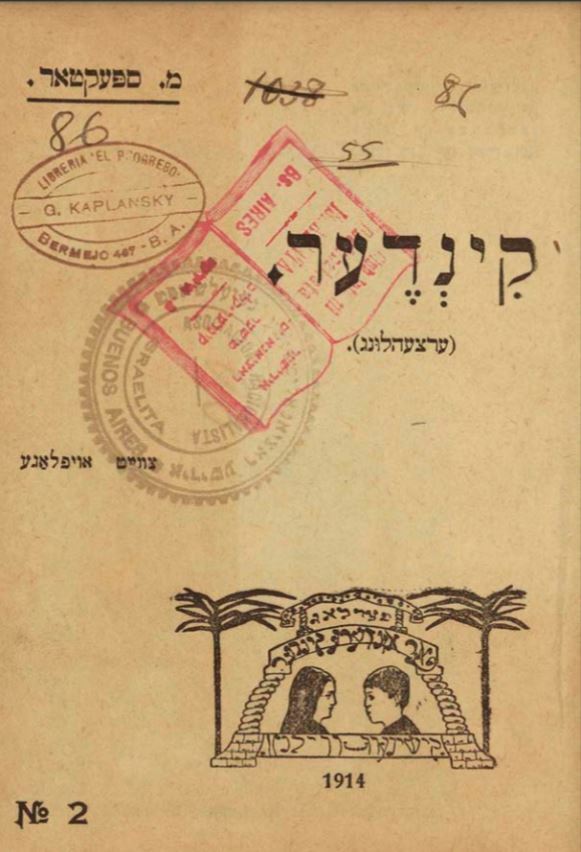 Children ages 5 - 13 can read a Yiddish story in the translation or original and submit a book report to In Geveb.