This is part three in a series of posts about an autobiography of a Polish youth from the 1930s found in the YIVO archives. You can read part 1 here and part 2 here; links to all the articles in the series can be found here.

Judging by his autobiography, RJ’s childhood was not unusual for the time and place in which he grew up. As would be expected when writing about his childhood, he gives some space to his time in cheder. RJ began attending cheder at age four and found the overall experience positive. To his young eyes, his melamed, the cheder’s teacher (who isn’t named), looked like a comical figure because each time he spoke his beard would quiver like “the edges of a gartl in the middle of shmone esrey.” 1 1 A gartl (Yiddish: גאַרטל) is a belt worn by religious Jews, primarily Hasidim, during prayer. The gartl serves as the physical divide between the upper and lower parts of the body, separating the intellect from man’s animalistic desires. The shmone esrey, also called the Amidah, is the central prayer in the liturgy. The sight of his teacher’s quivering beard would cause RJ to burst into laughter, but luckily, the melamed had enough of a sense of humor to take these outbursts of laughter in stride.

As with the memoir’s opening anecdote (the story of his stranded family rescued by an Elijah-like figure), RJ’s gartl simile demonstrates his proficiency in writing descriptively. But more noteworthy than his writing skills is the way his vocabulary underscores his insider status as a Jew who grew up among Jews. For RJ to leap to the gartl when searching his mind for a familiar object indicates how very steeped he is—and expects his audience to be—in the accoutrements of Jewish life. Furthermore, he doesn’t stop at the simple imagery of a beard quivering like the fringes of a prayer belt; he embellishes the simile by providing specificity of context: a gartl quivering in the middle of a shmone esrey. Only an insider would be able to instantly visualize this image: the Hasid shokeling, swaying with religious fervor, as he starts his prayers, his swaying steadily surging, so that by the time he is in the middle of his prayer, his shokeling is beating out a steady rhythm, as the fringes of his gartl quiver along with it. To RJ, no explanation of this simile is necessary. The quivering gartl is as familiar, as normal, as easily understood, as an American referring metaphorically to a home run.

Other than the institution of cheder, which is an intrinsic part of the communal Jewish experience, the first shared public event RJ mentions is the famine of 1919. 2 2 The famine in Poland in 1919 is generally considered part of the larger Russian famine, which reached its height in 1921-22. It was a devastating time, RJ explains: “The entire hope of a person rested on a piece of bread.” He relates how he, at six years old, stood in line together with everyone else and waited for that piece of bread. When they received it, they held onto it “as if it were the most precious gem.” Because there was no food at home, he, along with all other boys from poor families, went to a Talmud Torah to which the Warsaw Gmina sent food. 3 3 Warsaw Gmina. Literally: “Warsaw Community.” The community assistance program for the needy. The older boys would fetch the pots, and the younger boys, including RJ, would dole out the food. (As I read this tidbit, I tried to imagine American six-year-olds of this day and age doling out food from pots I can only assume were as tall as they were.)

One time when RJ and the other children were ladling out food, one of the boys blacked out and collapsed. No one understood what had happened, until they peeked into the boy’s bowl and saw a rat lying there. “Perhaps,” RJ writes, “this fact wouldn’t have been so horrifying to adults. At that time, man wasn’t more than an animal, anyway.” But children take such things more seriously, he believes, and to support his opinion, he quotes Armand Barbes: “A child’s play is a very serious occupation.” 4 4 I couldn’t find this quote or any reference to it among Armand Barbes’ writings. It seems likely that RJ was quoting Freud and mistakenly attributed it to Barbes. The rat incident, RJ writes, made a tremendous impression on him and he never forgot it.

How intriguing to consider the implications of RJ’s nonchalance over the ladling food “job” he had at six years old compared with the great trauma he experienced as a result of seeing the rat. Did he actually regard himself enough of an adult at age six that he saw nothing odd in being given this chore? Were the expectations of the community regarding children’s roles so very different from today? His next lines seem to confirm that impression: “When I turned ten years old,” RJ writes, “I was taken as seriously as an adult.” He recalls an uncle (the only reference in the autobiography to a specific member of his extended family) who would test him on his studies and speak to him as to an equal. His uncle would chide him cheerfully to spend time on studies only, as befit a young man such as he. By RJ’s own admission, he never felt such pleasure as in those days when he’d study with enthusiasm from morning till late at night.

Despite the famine, it appears that RJ’s childhood was a pleasant one. He seems to have only fond memories of cheder and later, of studying Talmud. Unlike some maskilim who wrote of cruelty at the hands of their melamdim or of the awfulness of their families, 5 5 See David Assaf, ed., Journey to aNineteenth Century Shtetl: The Memoirs of Yekhezkel Kotik (Detriot: Wayne State University Press, 2002), 144-45, for a vivid depiction of a melamed’s cruelty. RJ’s reports in these areas are benign. In one of the more popular literary genres that arose from the Haskalah movement—the anti-Hasidic / anti-religious satire—there is often a subjective hostility on the part of the authors toward the communities they came from, usually arising out of personal negative experiences. But RJ, it appears, enjoyed being a cheder student and derived genuine joy from his studies. His maskilic leanings, it would appear, stemmed not from a difficult childhood and adolescence, but from something within him that sought to be appeased.

Part 4, about the traumatic end of RJ’s childhood will appear next week! 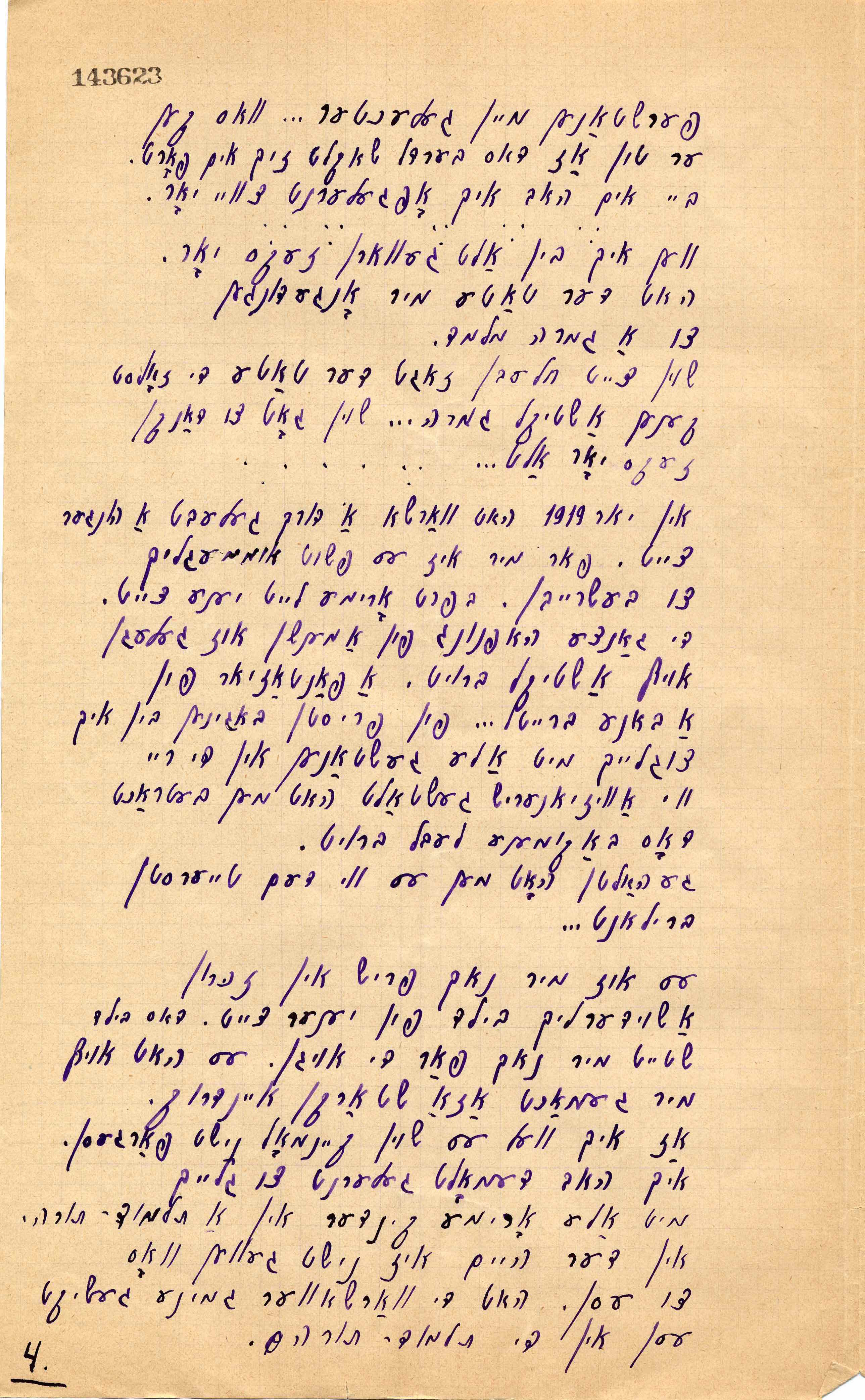 The fourth in a series of five posts about an autobiography found in the YIVO archives from 1930s Poland: suicide and the modern library of a maskil.

The second in a series of posts about an autobiography found in the YIVO archives from 1930s Poland: RJ’s hatred of women but love for the hasidic tale!