Review of Convergence, an Album of Multi-Diasporic Musical Longing by Anthony Russell and Veretski Pass

Review of Convergence, an Album of Multi-Diasporic Musical Longing by Anthony Russell and Veretski Pass

Now, a year later, Anthony Russell has once again stoked my admiration and demanded the attention of the Yiddish world with his new album Convergence. Recorded in collaboration with the vibrant and graceful Veretski Pass (Joshua Horowitz on piano, Cookie Segelstein on fiddle, and Stuart Brotman on cello), Convergence conjures the most salient kind of nostalgia: a longing for a past that never existed. Shimmering just beyond our grasp is the meeting of Jewish Eastern Europe folk music and African American spiritual traditions. What would it have sounded like if Sholem Aleichem’s late 19th-century Jewish, Yiddish-speaking characters had arrived at a Reconstruction-era Mississippi labor camp? What songs might these two groups have sung together? What histories of celebration and suffering might they have drawn out in concert with one another?

Though the premise might seem wild, Anthony’s project isn’t really such a stretch. Both Eastern European Jews and Black southerners have rich musical histories that turn sorrow and oppression into joyous expression. Both groups have robust and complicated relationships to the land and to labor. Convergence isn’t so much a utopian daydream of a Black Jewish history that never existed, as it is a bittersweet layering of the creativity, beauty, political courage, and solidarity exhibited by both Eastern European Jews and Black communities in the United States.

Convergence begins with “Water,” a mashup of Yedidah Admon’s Hebrew-language “Hafle va-Fele” and the traditional African American spiritual “Wade in the Water.” It’s pure musical delight. As a non-Hebrew speaker, I didn’t dive too far into the lyrical complexities and interplay between the alternating Hebrew and English verses. I just let myself enjoy Anthony’s strong and emotive bass vocals, letting them lead me on a wave of sound and feeling. The arrangement (by Anthony and Joshua Horowitz) and the instrumentals especially stood out on this track. In fact, the jazz-inflected contrapuntal piano was so bright, so energetic, so unusual, that I sometimes found myself distracted from the lyric as I tried to track the dazzling accompaniment.

Next, the listener boards the “Train,” the track on which the aesthetic of Convergence begins to come alive, deriving its musical cues from the lyric itself. In “Train,” the African American spiritual “When the Train Come Along” is interrupted by a Yiddish interjection:

[At the train stations, they ring a bell.
The conductors jump off.
Passengers run, each with his baggage
Many come aboard, many get off.
And if they tell you to get off, don’t negotiate--
even though you are not a very old man.
Your ticket has expired, and your crying is for nothing.
So has determined God – The Train Director.]

This Yiddish-language meditation on the inevitability of life, death, and God’s plan (from “Eyn ayznban” by Elyokum Zunser) feels cantorial. In Anthony’s interpretation, one imagines the call and response section of the Yom Kippur service: during the spiritual refrain, the whole congregation joins together, punctuated by Anthony’s impassioned, if impenetrable, prayer. The Yiddish lyrics, paired with Anthony’s stirring vocal slides, perfectly reflect the resigned devotion that we hear in the accompanying spiritual’s promise: “When the train comes along, Lord/ Gonna meet you at the station/ When the train comes along.”

Three tracks on Convergence stood out for me, and demanded especially careful listening for their musical complexity and political raisons d’être.

“Lift” begins with a rousing instrumental of James Weldon Johnson’s iconic song, “Lift Every Voice and Sing.” We get Anthony’s transcendant vocals, underlaid with an unexpected descending instrumental line of jazz-infused violin and piano riffs—one of the best musical moments in this collection. This joyful and victorious moment gets broken up by I.L. Peretz’s “Hof un gleyb,” which, in Anthony’s interpretation, feels like a workers’ march, a protest, an interruption of strident hope and determination to echo Johnson’s call to “march on til victory is won”:

[Believe!—the night has already vanished
And the clouds will drift away—
Blue—th­e heavens will be blue
With new stars and new suns.
New roses and new flowers
Will rise up and grow high
There will be shining, singing, fragrance
Everywhere—and over our graves.]

A subsequent classical piano cadenza feels dreamlike: Is this new day one that we will live to see, or simply dream of? One might imagine that the musical pieces in this puzzle would feel disjointed with their mix of gospel and jazz undertones, a Yiddish anthem, and a classical piano break. And yet, this track has quite the opposite effect, creating a dramatic and surreal collage of prospective victory, power, and peace while celebrating the traditions of protest and activism that might get us there.

“Stranger” brings us back down after “Lift,” reminding the listener that even real or imagined triumphs can’t erase suffering and oppression. Here, Anthony pairs Avrom Reyzen’s “May-ko mashma lon” (one of my all-time favorites) with the American folk song, “Poor Wayfaring Stranger.” It works uncannily well, twining the existential question of “May-ko mashma lon” (“What is the meaning of the rain? What does it teach me? Down the window-pane, the drops roll down like dismal tears”) with the folk song’s sad, wandering outsider’s lament (“I’m just a poor wayfaring stranger, a-traveling through this world of woe”). Ultimately, both the Yiddish and English speaker come to the same conclusion: This life on earth is only a painful stopover en route to that “bright world to which I go.” The instrumentation and audio mixing on this track are fascinating. As he does with several of the tracks on this album, Anthony here lends very different musical palettes to the English and Yiddish verses in “Stranger,” notably assigning the Yiddish a muffled, static effect. As a result, the spiritual part of the song feels more immediate and more present, as if it is resurrecting or re-speaking a deeper buried history. Here Anthony speaks most directly as an artist to the listener: This is my chosen history. Here I am.

In “Rosie,” we get another pairing that feels at once deeply personal and fiercely political—the nign (wordless melody) of “Es iz shoyn shpet,” and “Rosie,” a work song that Anthony first encountered on a Lomax recording of inmates from the Mississippi State Penitentiary Parchman Work Camp. At the track’s outset, the instrumentation evokes an apocalyptic chain gang. Eventually, it softens, weaving in the “ay liu liu” lullaby chorus that we’ve already encountered earlier in the album. A reporter’s voice cuts in, reminding the listener that “more Black men are in prison today than were enslaved in 1850.” This track leaves us with an eerie echo, unable to consign the dark moments of Convergence to a past long over.

Convergence is not all somber, nor is it simply a parade of political statements. Over the course of the album, we get a whole spectrum of genres and moods. There’s a Yiddish/spiritual lullaby (the intensely comforting “Horses” featuring delightful instrumentation), a cheerful take on a Purim song (“Open”), and an unexpectedly rollicking version of the classic “Rockin’ Jerusalem” woven together with “Av Harachamim” and set on top of a Cuban/West African rhythm. The simple, single-word track titles (“Open,” “Horses,” “Train,” “Water,” etc.) give the impression of various tableaux, an abstract collection of moments from disparate histories, now layered on top of each other for our collective provocation and pleasure.

For all of my praise for Convergence, I should note that this album is not easy listening, especially on the first go-round. As someone who is not a frequent listener of opera, Anthony’s classic bass vocals at first sounded quite formal and foreign to my ear. It took a second and third listen to begin to appreciate the intricate interplay between vocals and instrumentals, the exquisite vocal phrasing, and the double meanings and thematic convergences layered on every track.

Similarly, as an intermediate Yiddish speaker, I would have appreciated album notes to fully grasp the lyrics and the nuanced thinking behind the various pairings of African American spirituals and Yiddish songs. Despite my love for Yiddish music, I still had trouble identifying many of these songs, even with the help of Google. Anthony’s deep dive into the archives of Yiddish song is impressive, giving buried musical treasures new life. Companion notes would make Convergence more accessible and comprehensible to a wider audience.

Convergence undoubtedly succeeds in its imaginative and unusual project, to, in Anthony’s words, “reverse engineer the aesthetics of music from an imagined past.” We, in the present, are enriched. 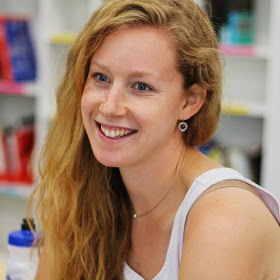 Leah Reis-Dennis is co-founder of the non-profit educational media company Verse Video Education and producer of its flagship series Poetry in America (PBS, 2017). 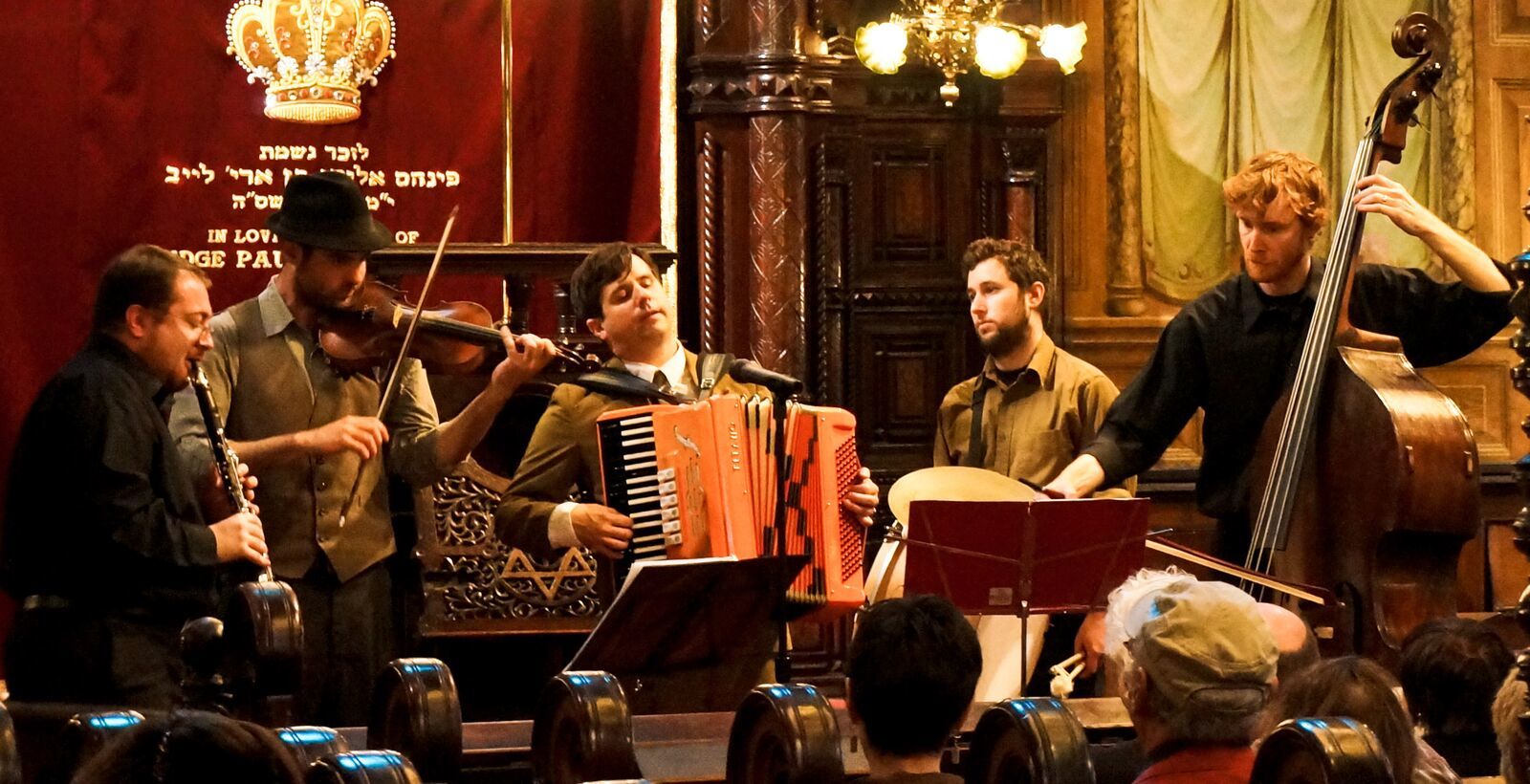 A Litvakus concert-cum-sociolinguistics-lecture doubles as a revolution you can dance to.