The days are get­ting short­er, there’s a chill in the air, and it’s begin­ning to look a lot like the sea­son for the Annu­al Con­fer­ence of the Asso­ci­a­tion for Jew­ish Stud­ies (AJS). Though we’re an online jour­nal, well suit­ed to the vir­tu­al inter­ac­tions many Yid­dish stud­ies schol­ars, trans­la­tors, and learn­ers have been con­duct­ing for the past sev­er­al years, we have missed see­ing faces, hear­ing voic­es, and shar­ing spaces with one anoth­er. We are look­ing for­ward to this oppor­tu­ni­ty to learn about oth­ers’ research and dis­cuss shared projects and new ideas in per­son. The con­fer­ence will be held in Chica­go this year on Decem­ber 19 – 21.

We are aware that many friends and col­leagues will not be able to attend the con­fer­ence this year due to COVID con­cerns, and we are grate­ful that there are many oth­er ways to learn about each other’s work. We hope that this roundup helps those who aren’t attend­ing to stay in the loop and makes it eas­i­er for schol­ars to reach out to oth­ers whose work sounds intrigu­ing and to learn about work in progress in the dynam­ic fields that make up Yid­dish Studies.

Where to find In geveb at the AJS conference

This year we are very pleased to be sponsoring two roundtables at the AJS conference, each reflecting different aspects of the work In geveb supports and advances:

On Sunday, December 19, 10:00-11:30 am in Sheraton Grand Chicago Millenium Park, we, together with the AJS Women’s Caucus and the Yiddish Book Center, are sponsoring a panel on “Froyen: Women and Yiddish: 25+ Years since the Landmark Conference.” This panel, chaired by our own Sandra Chiritescu, and featuring participants Agnieszka Legutko, Allison Schachter, and Eve Jochnowitz, will reflect on the landmark 1995 National Council of Jewish Women New York Section conference on “Di froyen: Women and Yiddish” held at Hunter College and the Jewish Theological Seminary and the groundwork it laid for decades of scholarship, translation, and activism around Yiddish women’s cultural production as well as the current state of such scholarship.

On Tuesday, December 21, 1:15-2:45 pm in Sheraton Grand Chicago Balloom V, we are sponsoring a panel on the topic “Shared language(s)?: In Search of Critical Identities in Hebrew, Judeo-Spanish, and Yiddish Pedagogy.” This roundtable, chaired by Meyer Weinshel and featuring participants Sara Feldman, Bryan Kirschen, and Orian Zakai, will address the current role of critical identities and pedagogies in Jewish language classrooms. Hebrew, Judeo-Spanish, and Yiddish classrooms are sites of rapidly evolving language usage, due in part to the inevitable connection between language production and contemporary politics. As virtual spaces of learning have also proliferated in recent years, and have become global sites of negotiating meaning of, and in, multiple languages, broader community support of Jewish languages has also led to more diverse classroom spaces that extend beyond the physical university. In addition to discussing these developments in their courses, participants will also highlight any current challenges, namely how structural, political, and cultural impediments remain when navigating old and new forms of language.

In past years, In geveb has hosted an informal kave-sho at the conference. This year, we know that many will be uncomfortable with removing masks to drink coffee together indoors, so we are planning masked office hours: look for the In geveb editors on the third floor of the Sheraton near the Chi Bar from 1:00-3:00 on Monday, December 20. We will be there to gather and talk informally - feel free to share with us your ideas about what you might want to contribute to In geveb, tell us your favorite pieces or what you’d like to see more of, or just introduce yourselves to us and to one another. In geveb aims to be a resource for Yiddish Studies in the broadest sense, which means that if you work with Yiddish and we don’t know you yet, we want to, and we encourage you to introduce yourself to our editorial staff and board at the In geveb roundtable, office hours, or wherever else you encounter us around the conference!

If you will not be at the AJS but would like to connect with our editors, please write to [email protected] to schedule virtual office hours with us.

Below you will find our guide to Yiddish at the conference. We are looking forward to learning from these varied and enriching presentations. If you are one of the presenters included here, we hope you will consider submitting your work to In geveb for publication.

Where to find Yiddish at the AJS Conference

All of the following panels, roundtables, seminars, and lightning sessions promise to have at least one speaker whose presentation engages with Yiddish in a substantive way. We include the name of these presenters and their papers, and in the case of sessions fully devoted to Yiddish topics we include the chairs and respondents. In the case of roundtables and seminars, we have included the names of all participants. Follow the links to the conference schedule for more detail. If you notice something missing or incorrect, please email us!

“Froyen: Women and Yiddish”: 25+ Years since the Landmark Conference

Jewish Journeys from Russia and the Soviet Union

Fact and Fiction in Off the Derech (OTD) Experiences

Women on the Edge: Women’s Rage and Revolution in Russian and Yiddish Literature

Gender and Questions of Agency

The Modes and Objects of Yiddish Popular Culture

Jewish Poetry and the Paranoid Style

Race and the Jewish Radical Left

Meetings and Movements Across Cold War Boundaries: Jewish People and Artifacts in Contact

Hasidism in light of Postcolonial and Diaspora Theory

Feminist Perspectives on the Body

The Spaces and Specters of Holocaust Memorialization

Shared language(s)? In Search of Critical Identities in Hebrew, Judeo-Spanish, and Yiddish Pedagogy 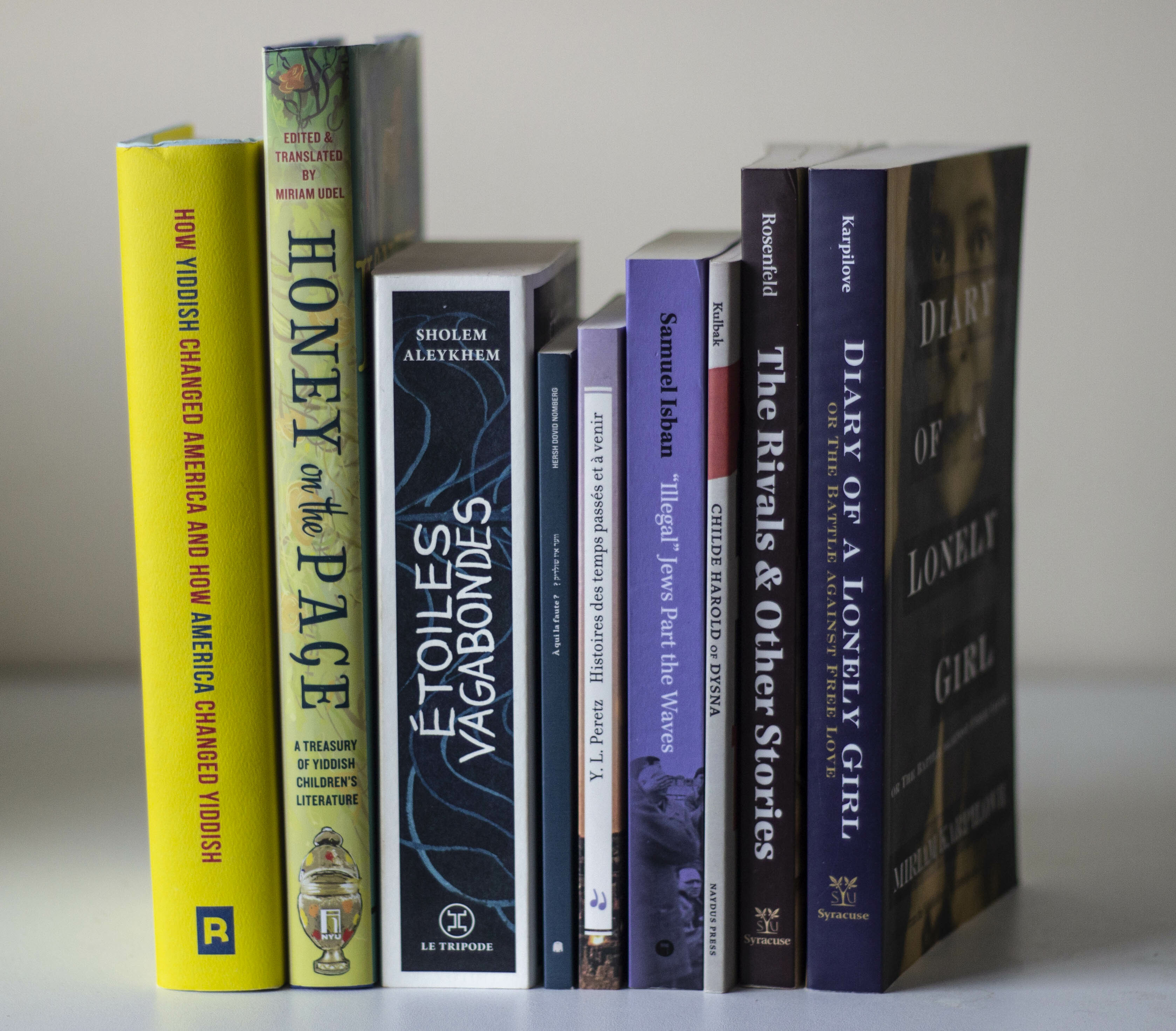 A roundup of translations published in 2020.

The Latest in Yiddish Studies in English: 2020

LeiAnna Hamel and The Editors

The latest installment of our annual effort to gather together the latest publications relevant to Yiddish Studies in English.