Let’s start with the basics here. Say I don’t know much about Yiddish or queerness. How do you explain what connects the two? Are there metaphors or words you find yourself using over and over again?

I think the answer to this changes for me based on time and place—and that is part of queerness, something being undone or challenged in relation to a given norm. So one word I think of is “choice”; I look at Yiddish as a conscious choice that I’ve made, rather than a mameloshn/mother-tongue. The idea of language being chosen rather than inherited really offers a fundamental challenge to reproductive heteronormative cultural transmission. What I mean is that the way in which we imagine identity, family, and even history as structured based on blood-ties binding nuclear families for generations is fundamentally challenged when we think of a language being chosen. Because Yiddish is so intimately bound with reproduction, even in its being called “mother tongue,” thinking of it as a choice makes us think about all the ways we queerly create other identities, families, and histories outside the norm.

I love Jeffery Shandler’s formulation of the criticism he heard [about trying to teach Yiddish at a university], that a Yiddish speaker should be made in the bedroom not the classroom. 1 1 See Sandra Fox’s article, “Smitten in Yiddish,” for statistical proof of this phenomenon, and/or for a blurring of conceptual boundaries between bedroom and classroom. I say, what if the bedroom itself isn’t thought of as a place for reproducing? So not only are (at least secular) Yiddish speakers really more likely to be made in class than in bed, but bed itself means something queerer—and conversely I think that invites us to think of the classroom not only as more productive, but also as potentially more tied to sex, or at least to erotics.

Tell me about you. How do you come to this work? How did you come to realize your interests in queerness and in Yiddish had anything to do with one another?

Well, I went to study Yiddish in Vilna and met a girl. True story. But really, it’s about something a lot deeper and not limited to sexuality. For me it was really about figuring out that the Hebrew context—the Israeli context in which I was raised—was actually only one potential outcome of Jewish history. Finding a Yiddish literary history, and especially poems written by women in Yiddish, I was suddenly faced with the promise of these alternative realities. Even though they didn’t end up being my present, feeling their potential changed how hopeless I was feeling about the present. I guess this goes back to the idea of choice as well, since it’s about discovering alternatives, and more generally having more perspective on what powers shape history (culturally, sexually, and otherwise). Realizing there were/are other choices was very empowering to me.

I read an article in Sh’ma where you talk about wanting to celebrate “the moment ‘between.’” Can you talk about an important moments of between-ness, or twos, in your own life?

Well, “in between” really describes my experience of the world. I think I am lucky or privileged enough to experience this as multiplicity rather than conflict. Maybe it is tied to being a bilingual (Hebrew–English) baby. But really it’s not just about two, but about challenging [the notion of] “the one” and embracing the multiple. So I feel at home in very different places (Tel Aviv, New York, Warsaw, Berlin), but am probably most comfortable in between those places and languages (I call Wars, the restaurant car on the train between Warsaw and Berlin, my happy place!). This is also tied to how I experience gender and sexuality: as always very, very open.

In your writing about Yiddish, you talk a lot about tense: past, future, and maybe most importantly, present. I loved your In geveb article about the poets Kadia Molodowsky and Adrienne Rich. In it, you write: “Against their will (much as they resist their own foremothers), I recruit both Rich and Molodowsky into my own queer history, reckoning through them, ‘in the most expansive way possible with how people exist in time, what it feels like to be a body in time, or in multiple times, or out of time.’” This actually reminded of a José Esteban Muñoz quote from his book, Cruising Utopia: “Queerness is not here yet. Queerness is an identity. Put another way, we are not yet queer. We may never touch queerness, but we can feel it as the warm illumination of a horizon imbued with potentiality. We have never been queer, yet queerness exists for us as an identity that can be distilled from the past and used to imagine a future. The future is queerness’s domain.” Do you see these two ideas as being in conversation with one another?

Oh, great question! I am often getting in trouble for putting together queer theorists/theories that are meant to be in opposition with each other. Mainly, I love bringing Muñoz into everything because I love the optimism his critique insists upon. I feel pathologically attached to that optimism, even though so much of my critical thinking is based in embracing loss.

What happens for you in translation?

Because I speak and read Yiddish I sort of view translation as invisible (it’s sort of how I grew up watching English language television with Hebrew subtitles and am very accustomed to that double input). Unless I really trip on something that forces me to stop and notice a major difference or incoherence, I just sort of move between translation and original. I need to be reminded that is not actually how most people are experiencing the text. For that reason I love teaching Irena Klepfisz’s stunning poem “Etlekhe verter oyf mame-loshn/a few words in the mother tongue,” because I can watch people learning Yiddish in the bilingual structure she offers, and together we grapple with the process of translation, and the power dynamics of language in general.

Back around 2003 there was an amazing Israeli performance artist named Tami Ben Tor who had a show call “Electro-Yiddish.” She was big and hot and wore a little nurse’s uniform and Russian fur hat and did electronic versions of Yiddish songs with a plastic pink keyboard. I think it really worked for me, because even though in a certain way she was using Yiddish as parody, the performance was really sexy and powerful and the Yiddish was an essential part of that. It was very contemporary and not at all nostalgic. It was funny, but I think the sex appeal of it made it impossible to laugh at, and was more about inviting in. At least that’s how I experienced it! Who knows what she meant.

I think a lot about humor in both Yiddishness and queerness as a very important and sacred thing, even as it can be sort of base. I know you’ve spoken and written a lot about wanting to resist this idea of Yiddish being simply a joke language. As someone who thinks so much about Yiddish and queerness and sex, tell me about your relationship to humor in all of this.

I do think humor is really sexy, in Yiddish or otherwise.

What is Shabbos’dik up to these days?

He is retired! But the repressed has a way of returning, so we’ll see… 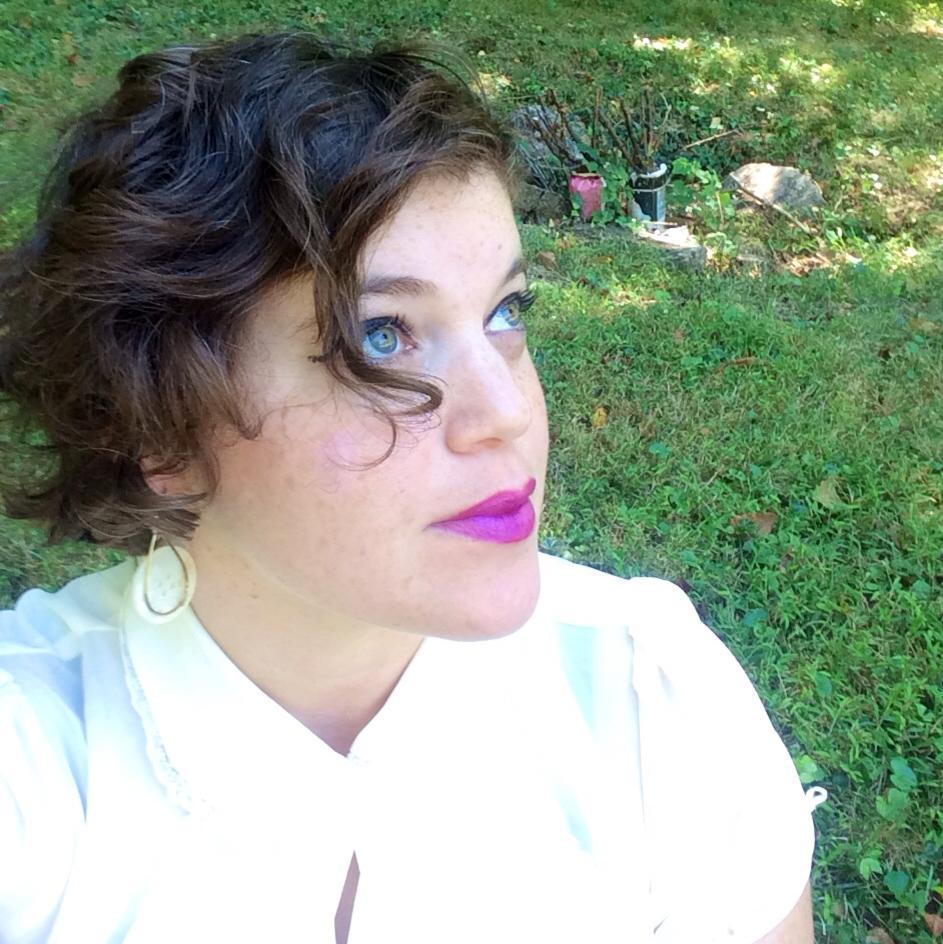 Temim Fruchter is a writer and artist who lives and loves in Washington, DC. 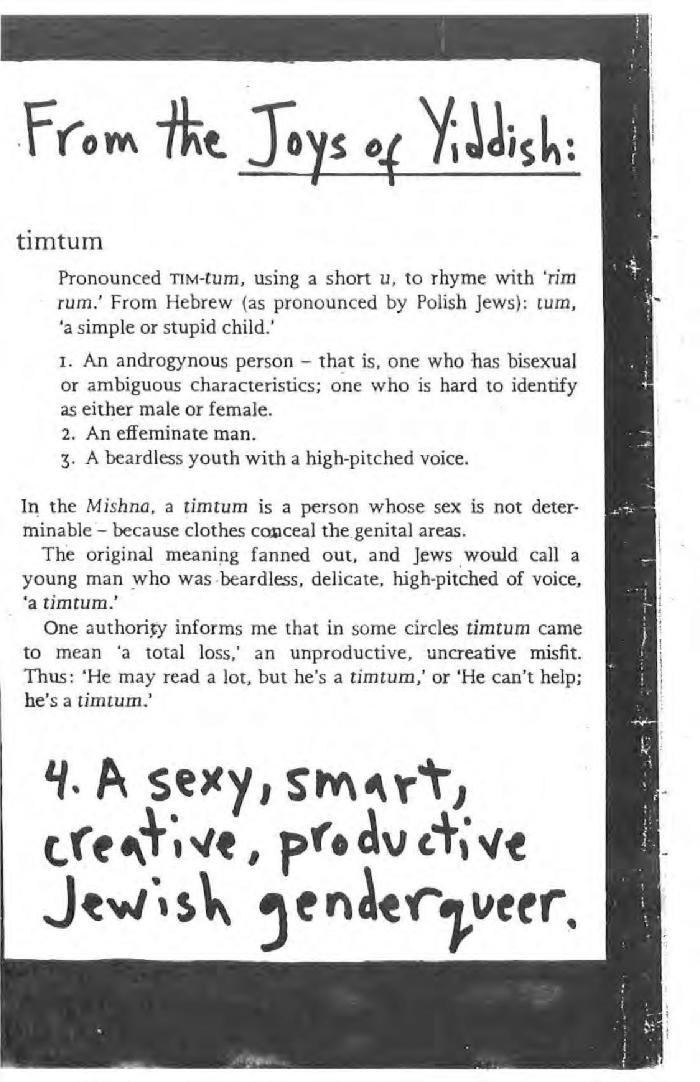